The movie a lot of us MCU fans have been waiting for since Natasha Romanoff (Scarlett Johansson) first made an appearance in Iron Man 2 is finally here. This solo movie is long long long overdue, but I'm so happy that the time has finally come to watch Black Widow in the cinemas (or Disney Plus). I personally have waited since at least 2012 to see Black Widow lead her own solo film, so finally getting to see this movie felt like a massive deal. So did Black Widow live up to my extremely high expectations? Yes, its a thrilling, captivating ride, tonally unlike any MCU project to date. As only the second female lead solo MCU movie, Black Widow will further open up the opportunity for more and eventually equal amounts of female led superhero movies. Which as a female superhero movie fan makes me extremely happy. Read on for my full review - there will be spoilers. 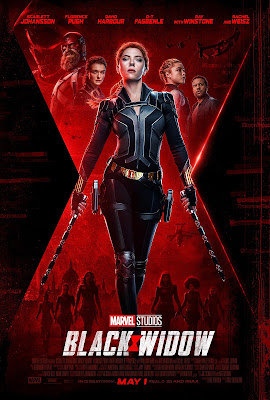 Watching Loki on Disney Plus? Check out my weekly reviews by CLICKING HERE!

Narrative wise, it's important to understand where Black Widow fits into the MCU timeline especially as Nat tragically died in Avengers: Endgame. Black Widow fits in between Captain America: Civil War and Avengers: Infinity War. At the start of the film we see Nat on the run after breaking the Sokovia Accords, by the end she is off to rescue members of Caps team shortly before the events of Avengers: Infinity War. The movie fills in details of Nat's life pre-Avengers, however only touching briefly on her time in the Red Room, whilst giving her a solo mission between her big team up movies. The film's main focus is on Nat and her 'family' particularly the relationship with her 'sister' Yelena (Florence Pugh), the duo share a great dynamic throughout and give the film a good foundation. We finally discover what happened in Budapest; Nat and Clint (Jeremy Renner) took down the Red Room and it's mastermind Dreykov (Ray Winstone). Which resulted in the death of Antonia Dreykov (Olga Kurylenko) - which you will remember is referenced by Loki (Tom Hiddleston) in Avengers Assemble. However, Yelena informs Nat that Dreykov and the Red Room still exist. Nat sets out to finish what she started, joined by her 'mother' Melina (Rachel Weisz) and 'father' Alexei/Red Guardian (David Harbour). A film thats focus is on women saving women from a system that aims to exploit and control them. The narrative is a balanced mix of deep issues and action sequences that honour Black Widow and her central role within the Avengers.

Scarlett Johansson delivers one of her best performances in the MCU so far, I'm actually quite sad that this will be her last appearance. I feel like after years of being over sexualised and side-lined, Johansson's Black Widow has finally come into a lead role in the universe only for it all to end. We did finally get a memorial style scene for Nat, however this does little to correct the lack of funeral scene in Avengers: Endgame. It's okay to put 'Avenger' on her gravestone but she still deserved a memorial similar to that of Tony Stark. There were also a few shots that perhaps should have been shot from different angles, its a shame that even in her own movie, which shows Nat as a total warrior, we still get shots which clearly focus on showing off her body. This just proves there is still a way to go when it comes to female superheroes. Florence Pugh gives us a tough but likeable Yelena, a character that is clearly going to fill Black Widow's shoes going forward. Yelena often pokes fun at the early version of Natasha Romanoff, with the poses and the hair flicks, pointing out how silly these things are. I love that Yelena wears her hair up whenever she is fighting, she is a new age female hero. It will be great to see how Yelena develops as a character, the after credits scene hinting at her making an appearance in the upcoming Hawkeye series which releases on Disney Plus later this year.

In a very fast paced film there are a few moments that really shine. The opening sequence is harrowing, showing the close bond between Nat and Yelena, a cute moment that quickly leads to a daring escape and the induction of the girls into the Black Widow programme. Their experiences hinted at during a title sequence so unlike anything we've seen in the MCU so far. The many references to Nat as an Avenger are emotional and the praise is well deserved, in her final scene Nat gets the Avengers theme. There is no big deal made about all these women being trained fighters and even heroes - they just are, this is another move in the right direction regarding female characters in superhero movies. There is however a hint of a romance, luckily it never results in anything. We did not need a repeat of the forced Hulk/Black Widow romance of Avengers: Age of Ultron.

Overall, a well deserved Black Widow solo feature. I loved the tone of the film, the combination of a action, emotion and comedy work well to ensure the deeper themes of the narrative are thought provoking. A farewell movie for a character that gave so many women and girls a female hero in the MCU since Iron Man 2 in 2010, a character that opened the door for future female leads and heroes. It's just a shame this will be Scarlett Johansson final outing. Black Widow is a must see for all MCU fans, a fantastic addition to the universe that stands out and makes itself instantly memorable. I cannot wait to watch it again.

Please leave a comment below and let me know your thoughts.