The MCU's third TV show is here. Following on from the success of WandaVision and The Falcon and The Winter Solider we have Loki. Tom Hiddleston returns as the god of mischief a character that has been central both as a villain and anti-hero since phase one. As you may remember Loki was killed in the opening minutes of Avengers: Infinity War, but when the Avengers travel back to 2012 in Avengers: Endgame the 2012 villain version of Loki steels the tesseract and escapes. The Disney Plus series picks up from this moment. Whilst we saw Loki develop to the point of being an ally of his brother Thor and ultimately give his life in the fight against Thanos, all of that development is lost and 2012 Loki reigns as a villain. Will we see Loki develop once again? and if we do, will it be into a hero or into more of a villain? The season is made up of six episodes that will premiere on Wednesdays on Disney Plus. I will be reviewing each episode here on this post, so make sure to bookmark this page and check back each week for my updates. There will be spoilers beyond this point! 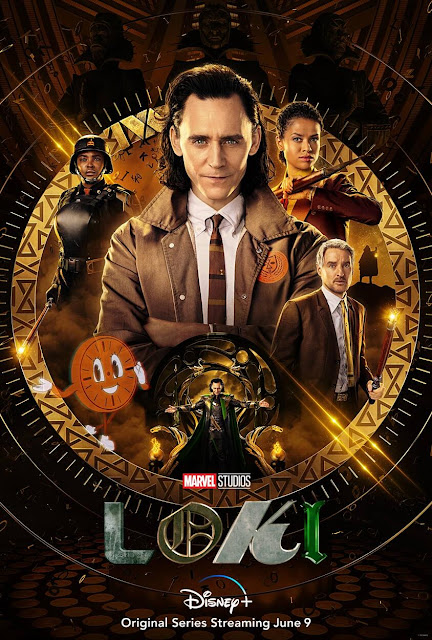 Episode one opens in 2012, during the time travel events of Endgame. After stealing the tesseract, Loki escapes too the Gobi Desert, Mongolia. Where he falls out of the sky, crashing into the sand that's reminiscent of Tony Stark in Iron Man. However, his escape quickly comes to an end when the TVA (Time Variance Authority) intercept and arrest him. Loki is then taken to the TVA's very 60's/70's vibe headquarters. Where during a intro video it is explained that there was once a multiverse, but a war caused chaos so the Timekeepers emerged and created one timeline, eliminating the multiverse. They then created the TVA to keep track of people who jeopardize the timeline (called variants), arresting them before setting the timeline back to how it should be. The words multiverse and madness are used in the same line here - so that seems to point at the events of Loki leading to Spider-Man: No Way Home and more importantly Doctor Strange in the Multiverse of Madness.
Later Loki meets Mobius (Owen Wilson), who gives us a slideshow of Loki's life. From the bad - the events in New York, to the future - the death of his mother, reconciliation with Thor and Odin and his eventual death. All of which makes Loki rather emotional, it's clear he feels surprised but happy with his eventually redemption. Which makes me think anti-hero Loki was there all along, just wanting acceptance. Owen Wilson gives a captivating performance as Mobius as he attempts to recruit Loki to take down another variant Loki - perhaps old or female Loki. Tom Hiddleston falls seamlessly back into the role of Loki, bringing a natural, believable performance. It's great to see Loki's self-importance and charismatic, entitled personality once again. Even though this is only the first of six episodes, I can tell we are in for some great Loki moments - starting with his threat to gut a man like a fish and the man having no idea what a fish is. Ugh I'm so glad Loki is back.
Now onto some theories, it's very clear that we are in for some WandaVision level theories with Loki. Already Mephisto has been theorised - the stain glass window a possible hint. The word Nexus pops up - now this also popped up in WandaVision. A nexus is a connection or series of connections linking two or more things - so this could be further evidence of the multiverse, or it could all be a coincidence. At around 34 minutes what looks like Peggy Carter appears from a portal - perhaps a variant. Then we have the infinity stones - this made me so angry, as if the TVA just have a whole draw of stones - stones that could have helped the Avengers and saved both Nat and Vision. Let's talk about the TVA, they certainly have a vast amount of resources and control over people's lives. We know that even if a person is late for work and that changes the proper course of time, they will be arrested and classed as a Variant by the TVA. And who are the timekeepers to dictate what happens, they literally seem to control everything. Which means the Avengers were always meant to win, kind of takes the stakes away a little, I think. Overall, a good opening. This is sure to be another great MCU show.