on May 18, 2021
It sure does feel good to be back at the cinema! Last night I finally returned to the cinema for the first time since March 2020! I honestly would have gone to see anything, desperate to be back experiencing movies in their rightful place on the big screen. But luckily Sony lined up the perfect new release for opening day: Peter Rabbit 2: The Runaway. I loved the first film which released in 2018, so was expecting big things from the sequel. Due to that fact that trailers for this film were released quite a while ago, I had actually forgotten what the premise was, or even what characters where returning, so it was like I would walking into the cinema blind. So, is Peter Rabbit 2: The Runaway worth heading back to the cinema for? Read on for my full review, warning there will be minor spoilers. 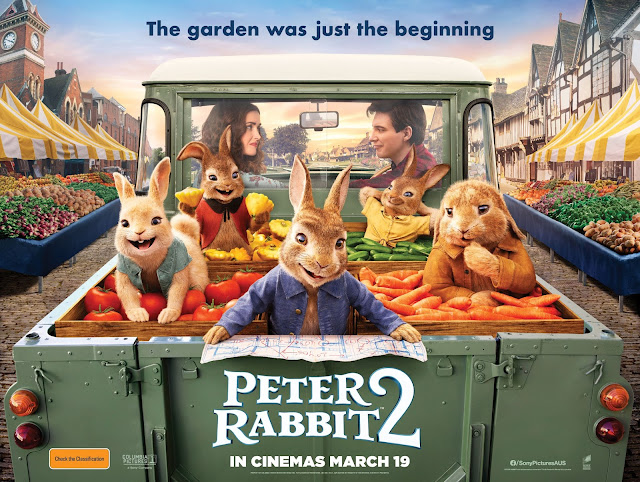 Check out my list of most anticipated 2021 movies by CLICKING HERE!
Peter Rabbit 2: The Runaway picks up a while after the first film. Bea (Rose Byrne) having turned her paintings of the rabbits into a storybook, is now running the toy shop with Thomas (Domhnall Gleeson). Within the opening minutes of the film Bea and Thomas get married, now having formed a makeshift family with the rabbits: Peter (James Corden), Flopsy (Margot Robbie), Mopsy (Elizabeth Debicki), Cottontail (Amiee Horne replaces Daisy Ridley) and Benjamin (Colin Moody). While Bea's book gains the attention of publisher Nigel (David Oyelowo), Peter is stuck. Unable to shake his mischievous reputation, despite his attempts to do good. After being called the bad seed by both Nigel and Thomas, Peter runs away. Surrounded by thoughts of what type of bunny he should be Peter stumbles across a crook that manipulates him whilst he is at his lowest. Through a series of events that see Peter lose his family, both human and animal, Peter must choose who he really is with the help of Thomas. In parts the narrative is pretty fun, in others in becomes a little unpolished and very predictable. Something sequels can struggle with is a linear, well executed narrative and Peter Rabbit 2: The Runaway certainly stumbles at points but remains as fun as the first film. 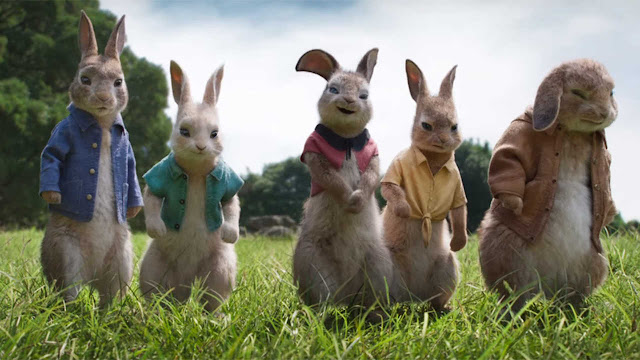 What made the first film so great was its laughs, and Peter Rabbit 2: The Runaway will not disappoint, it has laughs in abundance. From a fox that has turned to a plant-based lifestyle, to Flopsy renaming herself Lavatory. Domhnall Gleeson provides more than his share of laughs throughout, from uncontrollably rolling down a hill, to chasing after his broken-down car. I dare you to watch this film and not laugh, I was actually surprised how many times I laughed during the screening. The film also has equally terrifying moments, such as a pig being taken to a butchers and a deer being sized up to go on a wall - but don't worry both are rescued. There are also some stand out touching moments, such as the bonds between Thomas and Peter, and Bea and all the rabbits. We delve into Thomas' past which is sweet and something he and Peter bond over having lived similar experiences. For all its laugher, this film is also surprisingly touching. 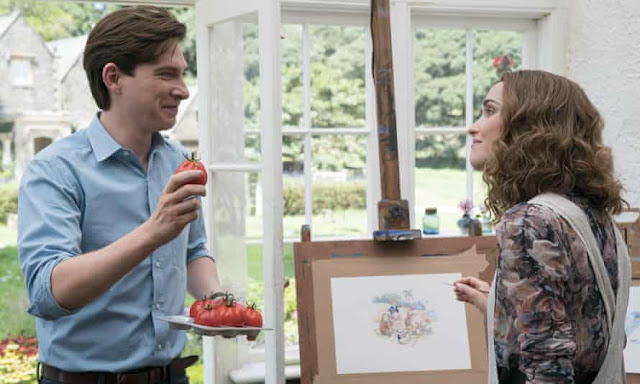 However, past the great laughs and touching moments are a few glaring issues. The first is the storyline regarding a teenage girl, it's made very clear that this girl cannot be distracted by anything - literally a squirrel bites and nothing - except a teenage boy. This felt so outdated and a little stereotypical. Moreover, when Thomas goes to talk to Nigel about Bea without her knowledge, when they later argue about it, Bea never brings up the fact that she can handle her own best interests. Also, the rule of three, where something is done three times for ultimate laugher or dramatic effect is over used. The first few times it works. But after that it gets kind of boring. Also, here in the UK we don't find animals in the street and put them straight into pet shops, we also don't still have general use fancy trains. Whilst I get the fancy train thing is part of the whole cute, quintessential Britain image it is a little outdated. Also, it's a film set in the UK with mainly British character yet a joke about a torch is used - where they call it a flash light then Peter says 'for our UK viewers Torch'. It's just annoying.

Overall, Peter Rabbit 2: The Runaway on the surface is a pretty funny film with some awesome CGI bunnies. But it lacks the rawness of the first film, and overuses outdated stereotypes and filmmaking techniques. Nonetheless, it is still an enjoyable watch, that children and adults alike will enjoy. The changes of location where certainly refreshing, and the voice cast and physical actors all bring such a charm to their roles that I would probably re-watch this film. The film also teased a possible third film, which would be great, because I would so love to see what is next for this group of bunnies.
Let me know what you thought of Peter Rabbit in the comments below.
Thank you for reading xx