(Finally!) Most Anticipated Movies of 2021

With cinemas finally set to open - at least here in the UK, I thought it was finally time for my annual 'Most Anticipated Movies' of the year post. I had originally drafted this post in January but considering Cinema's never opened I decided to wait until a date was confirmed and movie releases where firmly scheduled. With that being said Cinemas could once again close and movies subsequently get pushed back - if that does happen, I will do a movie release updates post, similar to the one I did in 2020. With many things still so uncertain, two things are for sure: There are some fantastic movies ready to release and I can't wait to watch them. Give the post a read and let me know in the comments which films you are most looking forward to finally watching. 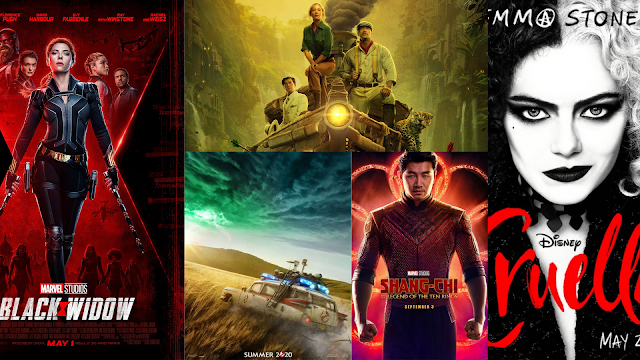 So that's my list of most anticipated movies in 2021. It may be five months into 2021 but it's clear that in the remaining seven months of 2021 cinemas are going to be full of great movies. Production companies are certainly making up for lost time. Other films releasing this year include: A Quiet Place Part II (John Krasinski), The Hitman's Wife's Bodyguard (Patrick Hughes), Space Jam: A New Legacy (Malcolm D. Lee), The Suicide Squad (James Gunn) and The King's Man (Matthew Vaughn). Let me know what films you are looking forward to seeing! Let's hope things remain safe and cinemas can remain open.
Thank you for reading xx
Please check out some of my other posts here: Just Another Film Blog