Devilishly sublime darlings! Cinema is back in full swing here in the UK, and Disney's latest live action adaptation is finally here. Cruella is the latest in a long line of these usually great remakes but is only the second to revolve around the origin story of a villain. The first Maleficent transformed the once feared villain into a sort of hero which was a real shame. I was so worried they would do a similar thing with Cruella, but I need not have worried because  - just without the fur and smoking. In Disney's darkest live-action remake ever we see how a villain is created. It is a deliciously original take on one of cinemas best villains. I did not expect to like Cruella and I don't...I love it! Is it possible to be obsessed with a movie after just one viewing? Because I think I am slightly obsessed with everything from the narrative to the fashion and the music. Read on for my full review - there will be spoilers (but only minor ones). 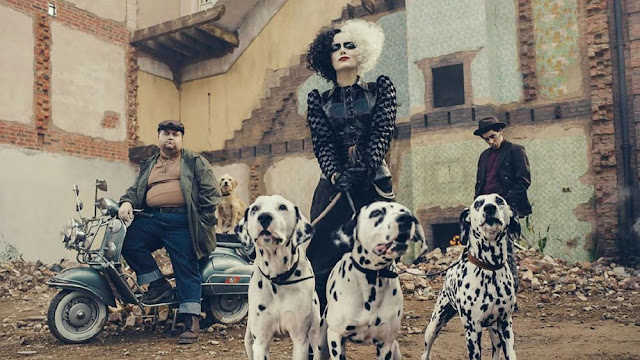 Cruella is one of my most anticipated 2021 movies. Check out what films made the list by CLICKING HERE!

Narrative wise Cruella is perfect. Hitting in all the right places, bringing both chaos and order to the origin story of a slightly mad villain. Set in 1970s London, Cruella (Emma Stone) pursues her passion and dream of becoming a fashion designer. Just as her dream materialises into reality, Cruella learns a devastating truth. Her employer the Duchess (Emma Thompson) is in fact the woman that murdered her mother (Emily Beecham) in the opening sequence. Cruella known as Estella up until this moment, chooses a path of revenge, embracing her evil tendencies to become Cruella. Her plan with the help of childhood friends Jasper (Joel Fry) and Horace (Paul Walter Hauser), sees Cruella upstage Duchess at fashion shows and events. In these moments, narrative, fashion, and music come together to make bold sequences. But these moments are balanced out with real character development and struggle. 101 Dalmatians favourites Anita (Kirby Howell-Baptiste) and Rodger (Kayvan Novak) feature in amazing ways. And the original character Artie (John McCrea) a dress maker and Cruella's friend is a brilliant addition. Narrative wise I cannot fault Cruella, every moment hits perfectly even the manic moments. They managed to make Cruella a three-dimensional, captivating character without making her a hero - villains can have bask stories and people they care about too! Her power comes from her manic, bad nature and I'm one hundred percent here for it. 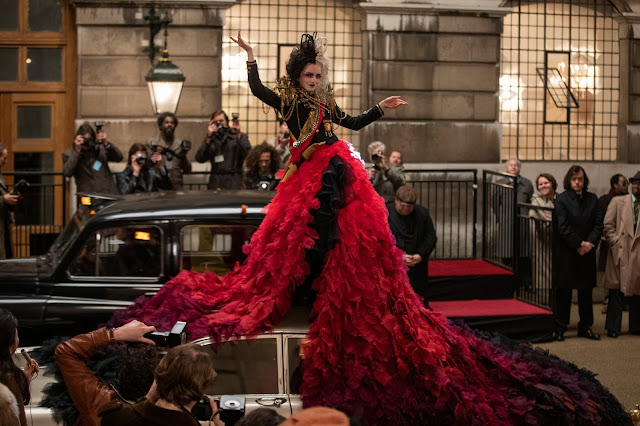 Emma Stone is divine as Cruella, she brings style, emotion and incredible talent to the role. Her mannerisms perfectly matched to her characters animated counterpart. There's something slightly unhinged about Stones' performance. Even though I went into the film knowing fur was no longer going to feature, when Cruella makes a Dalmatian coat, for a moment you question - did she really turn the dogs into a coat? Theres a continuous feeling that possibility she's going to do something really evil or unhinged. Emma Thompson is also brilliant, but at times fails to match Emma Stones' sensational performance. Her character, more evil than Cruella (with no issues with murder), if not as mad. Joel Fry and Paul Walter Hauser both give a much-needed refresh to their characters, transforming them from useless henchmen, into Cruella's family. There is a hint of a deeper relationship between Cruella and Jasper, but it's not forced. All the characters really embody this idea, that you can have relationships, family, friends even if you are a villain. No longer to villains have to be backstory free, and evil just because. 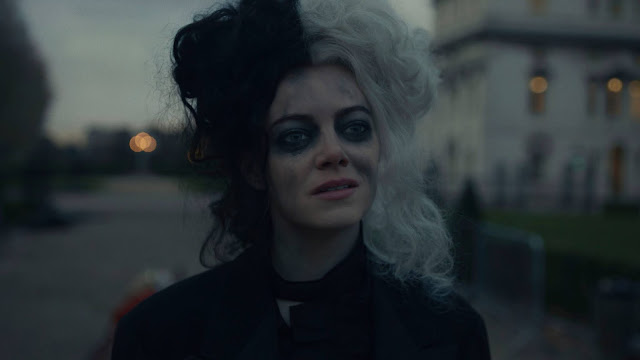 The 70's setting was a stroke of genius. The combination of music, the punk vibe, the fashion and personalities make Cruella a visual spectacle. The commitment to the era is meticulous, every detail clearly researched and brought to life. The locations, and sets are dressed perfectly, evoking 70s culture and life. The only downside of the whole film is the CGI dogs, all five dogs are central to the narrative, yet you can tell they are CGI which is a real shame. The costumes, however, are on another level, designer Jenny Beavan came to serve looks, from a moth dress, to a dress made of newspaper cuttings, fur never felt like it was missing. An Oscar should certainly be a given. Then there is the music, with songs from some of the 70s greats including, Nina Simone, Queen, Bee Gees and The Clash are used to not only bring the 70s to life in such a riotous way, but also to add impact to every important scene. Without the music Cruella would not be as unique, fun or daring. This film makes me want to throw a Cruella inspired party, with black and white wigs all round. 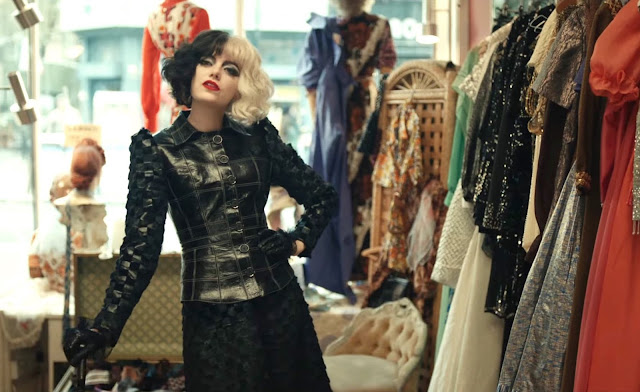 Overall, Cruella is a fantastic film, full of flare, style and punk energy. It is a sensation, and I am obsessed. Talk of a sequel is already spinning and of all the Disney live action remakes, Cruella is the most deserving of a sequel. After all Cruella is just starting out, however one question remains - will fur be part of her future? I would highly recommend giving Cruella a watch at the cinema if you can, however it is also available for a fee on Disney Plus. I really hope Disney break the mould with future live action remakes, because Cruella is simply sensational.

Let me know what you think in the comments below.

Thank you for reading.