The moment a lot of DCEU fans have waited for has finally arrived. The day has come for Zack Snyder to show the world what he envisioned when he started work on Justice League. For those that don't know Zack Snyder had to leave the production of Justice League and director Joss Whedon took over, Whedon reshot a large portion of the film and that's what was released at cinemas in 2017. The film failed to leave a lasting impression, was muddled, erased characters and was borderline sexist. Since then DC fans have petitioned for Zack Snyder's version and in 2020 we finally got the news it was happening. A question that was on my mind before watching was: Will it be that different? I can confirm that it is a different film, the central narrative remains but in every way it is a huge improvement. So, is Zack Snyder's Justice League a good film? Short answer - yes, it's a fantastic film. Snyder's Justice League is a four hour long epic in every way. Read on for my full review. (There will be spoilers). 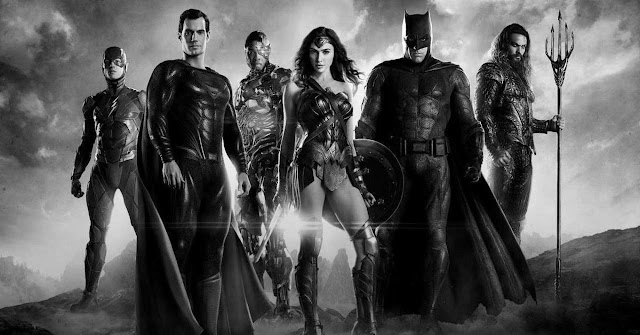 The narrative runs the same, the heroes must unite to stop Steppenwolf (Ciaran Hinds) in his attempts to unite the mother boxes and destroy earth. But Snyder's version is more cohesive, making it an easier watch despite is extensive length. The cohesive narrative is in part due to much needed character development. Both Flash (Ezra Miller) and Cyborg (Ray Fisher) finally get proper introductions, which allows us to connect with them whilst adding clarity to the narrative. Cyborg is no longer weirdly side-lined; he is arguably the main lead for a third of the film. The depth added to Cyborg and Flash makes me want to see more of them, I want to see how they develop further, I want to see them lead future characters. Gal Gadot's Wonder Woman is treated as a hero, the joint leader of the Justice League. In a powerful scene she saves a group of schoolgirls, inspiring young women, a symbol of empowerment. A huge improvement on Whedon's choices to film between her legs and have Flash fall on top of her. More depth is added to Aquaman (Jason Momoa), no longer is he comic relief rather a cynic, who is in touch with the emotions of those around him. Batman (Ben Affleck) reclaims his status as a serious force, his use of technology and determination revive his character from joke to the intimidating Batman. Wonder Woman, Batman, Superman (Henry Cavil), Cyborg, Aquaman and Flash all get their moments to shine, in uniquely glorious ways. 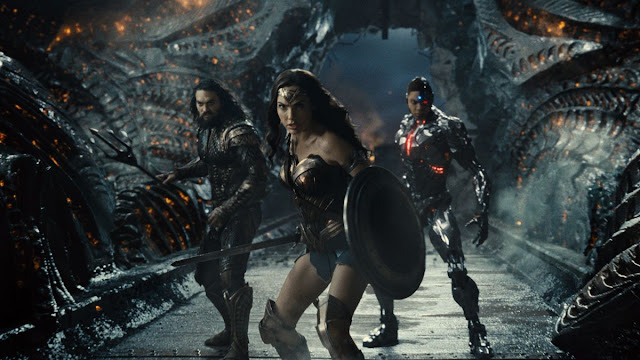 But what makes the Snyder cut a triumph is its visual style. This film is beautiful to watch. From the well-timed use of slow-motion sequences, to the juxtaposition of bright flashes of colour in the darkness, this film is a visual feast. At times the CGI is a little unfinished, pulling us from the film however this only happens a few times, and I have to admit the CGI was better than I ever thought it would be. The cinematography is daring at times giving us breath-taking moments. As we see Wonder Woman for the first time, the camera pans down from a bird's eye, only to swoop back up to almost the same shot, revealing Wonder Woman stood on a golden statue. It's bold, powerful and eye-catching. In the Knightmare sequence, there is some shaky handheld camera moments, focus pulling is played with combining brilliant focus with blurred images, as well as a combination of low and high angle shots, extreme close ups, all of which create a very raw scene unlike anything I've ever seen. There is also some fantastic imagery. In one scene we see Batman shot from below as he stands upon a skeleton, such an amazing gothic image that screams Batman. 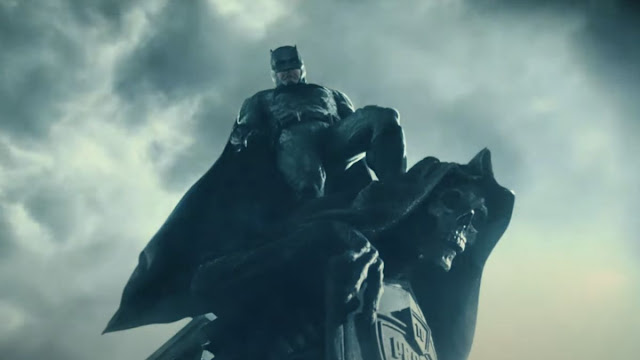 There are some really stand out scenes throughout which are the perfect combination of narrative, visuals, character development, acting and sound. These are: The attack on Themyscira, Barry Allen saves Iris West (Kiersey Clemons), The final battle sequence and the two visions of Knightmare. The attack on Themyscira showcases not only how tough the Amazons are but how compelling they are as characters. Wonder Woman's mother Queen Hippolyta (Connie Nielsen) sacrifices her own people in order to protect the mother box. This scene is a great show of strength with a haunting feel, the music by Junkie XL amplifying these emotions throughout. Barry saving Iris is our introduction to the flash, we see Iris crash as time slows. We see the world as Barry does, as he speeds to save her. He breaks a window with just the touch of a finger, beautiful music plays and blue flashes around him. Despite the speed at which he moves, Barry remains graceful, poised which is part of the beauty. The final battle is full of great team up shots, Wonder Woman, Aquaman and Superman really bring the heat throughout. But it is Cyborg and Flash that are the real MVPs of the battle which is another great thing to come out of this cut. Then there are the two Knightmare sequences, the second I mentioned above but the first showing Wonder Woman dead is chilling. Showing the future in movies is risky, but these scenes, the drama the betrayal of Superman is intriguing. Plus, the Joker (Jarod Leto) and Batman interaction is probably the best one I have ever seen. 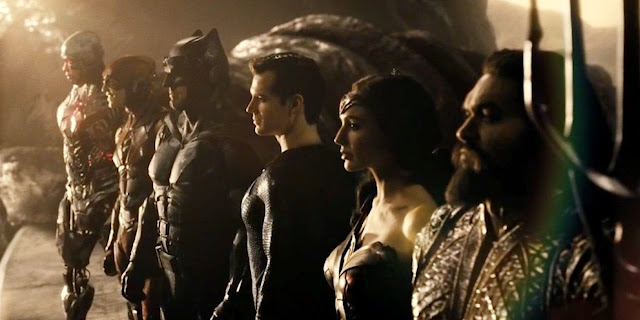 Overall, Zack Snyder's Justice League is a fantastic film. I am so glad that Snyder got to share his vision with the world - this film never should have been side-lined and hopefully it will get a cinema run in the near future. So, what next? I'm hoping that this version of the DCEU is restored. I have to see what happens next; I see no future for DC without making this film canon. We need to see Justice hall, we need to see the future Knightmare scenes actually happen, we need more of Jarod Leto's Joker. I also noticed that one of the pods was open on Superman's ship - so it looks like Kara aka Supergirl is out and about. Everything ties up so nicely for another movie. Zach Snyder's Justice League is a visual epic, a brilliant showcase of DC's cinematic potential.

What did you think of the film? let me know in the comments.