Valentine's day is upon us, a day that comes once a year and is often signified by all things red and romantic. The holiday that many think was created by card companies to increase profits which to an extent is true. But there is a foundation of tradition and mythology mixed in. Whilst not one of my favourite holidays, I still wanted to make a little Valentines watchlist after all I do love movies. So, I thought I'd recommend some movies that are perfect to watch on Valentine's day regardless of your relationship status. Plus, here in the UK we are under a national lockdown, so there is not much else to do other than cosy up inside and stick a good movie on. Whether you are celebrating Valentines with a loved one, with friends, family or alone, stick on one of the movies I have picked and enjoy. Read on to see which nine films I picked. 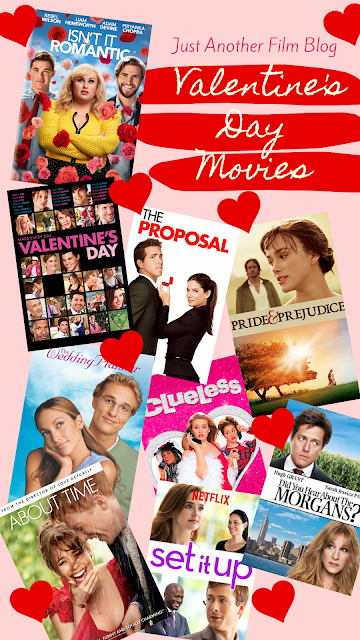 Set on Valentine's Day, couples face the day together. Some struggling to make their relationships work. Others try to find love. A multigenerational film, with a large cast and multiple storylines. A cute film full of Valentine's day romance.

Where to watch: Rent on Amazon.

A classic J-Lo romantic-comedy. Mary a wedding Planner is assigned a lucrative wedding account when she is rescued from a near fatal crash by the groom. Mary trying to find love is thrown into a difficult situation whilst trying to get a promotion at work. A romantic film, with lots of laughs.

Where to watch: Hulu.

When Natalie gets knocked unconscious, she wakes up in an alternate universe. Natalie soon discovers that she is the leading lady in her own rom-com. A brilliant comedy that takes key elements of romantic films and twists them in a humorous way.

Margaret a ruthless book editor faces deportation. To save her job and stay in America she convinces her assistant Andrew to marry her. The fake couple take a surprise filled trip to Andrew's hometown to prove their relationship is real. A modern classic full of drama and funny moments.

Where to watch: Amazon Prime.

Adaptation of Jane Austen's novel. Mrs. Bennet is eager to marry her daughters adventitiously. When Elizabet Bennet meets the rude and stony Mr. Darcy love is far from her mind. A passionate drama starring Keira Knightley. The perfect choice for period drama fans.

Did You Hear About the Morgan's?

When the Morgan's witness a murder, they are placed in witness protection and sent to a small rural town. Their failing marriage is continually tested throughout the course of the film. A great film that focuses on a couple that have been married for some time and have lost the original spark.

Two overworked assistants band together in an attempt to get their bosses into a relationship so they can take some time for themselves. Whilst working on their boss's relationship, sparks fly between the assistants. A funny easy to watch film, perfect for a chilled movie night.

More of a Galantines film. Cher a rich high schooler learns to deal with life and the problems that arise during school. She takes a new student under her wing, helping her find her place at school. A classic movie, with romantic storylines and iconic costumes.

There are many more romantic films that you can watch on Valentine's day. I love every one of these films and you hope you watch at least one over Valentines. Please give this post a share and let me know in the comments which Valentines film you like the most. Have a good Valentines.