on February 29, 2020
The studio that created my childhood favourites: Toy Story (1995), Bug's Life (1998) and Monsters, Inc. (2002) brings us a new animated feature: Onward. If you're like me you will go into a Pixar film with great expectations, after all they didn't produce a bad film until Cars 2 in 2011, but their recent films have been a little on the disappointing side. However, Pixar is almost back to fighting form with their latest release Onward. Onward is a charming, fantastical adventure, that will leave audiences emotionally drained yet satisfied - this film is certainly worth a watch. Adventure on for my full review - turn back now to avoid spoilers (but remember to come back)!

Ever seen Shrek? Check out my movie rewrite by CLICKING HERE 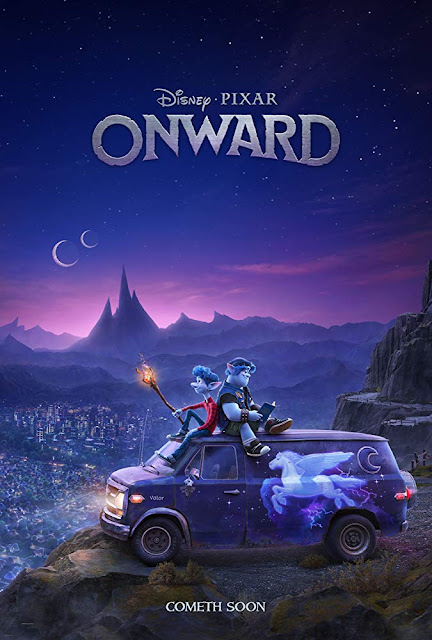 Onward starts in a storybook fashion, showing us a world full of magic. But flash forward a few hundred years and magic has been replaced by technology, once magical creatures have lost their charm (unicorns are rabid, and fairies have lost the ability to fly) and wizards have vanished from existence. We join brothers Ian (Tom Holland) and Barley (Chris Pratt) who are gifted a magical staff and spell that will bring their late father back for 24 hours only. Barley a magic enthusiast instantly tries the spell however nothing happens leaving Ian and mum Laurel (Julia Louis-Dreyfus) disappointed. Ian later tries reading the spell, the magic staff comes to life and begins the process of bringing the dad back however the spell is too strong and fails with only the father's bottom half having formed. The brothers head on a quest to complete the spell and spend time with their father, but with only 24 hours on the clock they face an almost impossible challenge. The film ends with the father materialising for only a few minutes and in a very sad scene Ian gives up the chance to meet his father and let's Barley say the goodbye he always regretted running away from. The last 10 or so minutes will be a particularly hard watch for anyone that has lost someone and wishes they could have one more moment with them to say goodbye, the end certainly brought a tear to my eye. I actually found this film so emotive that I nearly cried just explaining the storyline to someone. So, narrative wise expect a full Pixar magical experience.

Part of Onwards charm is in its world creating. The magical world and its characters are like nothing I've ever seen and exactly what I expect from Pixar. I would have liked to see a movie set in the past as it were, where magic was at its height - there is certainly scope for a prequal there. I loved the magical world of Onward, from the houses, the creatures, the magic and the fact that dragons are pets. Onward places focus on lost skills due to modernisation, such as a Centaur not being able to run at speed because he can drive, fairies not being able to fly because they stopped once planes were created and once majestic unicorns are reduced to feral, mangy scavengers. This focus holds a mirror up to modern society and our lack of skills without technology - which is very clever. Onward also subverts expectations, for example when I think of fairies I think of tiny, gentle magical creatures not hells angels. Moreover, when the brothers set off on their quest they venture to a creepy inn to find The Manticore (Octavia Spencer) but when they get there they discover a family restaurant, fully of gimmicks. The Manticore is no longer a feared creature but a business owner who needs to rediscover who she is. You never quite know where Onward is going which is part of the fun because when you start expecting one thing BAM! It subverts your expectations! You really feel like you are on a journey (both emotionally and physically) with Ian and Barley.

Voice cast wise Onward is pretty perfect. Tom Holland delivers a heartfelt performance as anxious Ian. Chris Pratt is perfect in the role of overloud geek Barley - however I did find Barley a little much at times. The brothers are a perfect mix and their relationship and growth thought-out the film is brilliant, but the emotional depth both characters and actors bring to the film are what make Onward such a touching tale. Julia Louis-Dreyfus is fantastic in her role as powerful and protective mum laurel. She brought so much to the film and it was lovely to see parents in a central role. Octavia Spencer and Mel Rodriguez (Colt a centaur cop) both give believable performances that help create the magic. But great narrative, world building and voice actors are not the only things that make Onward a great watch. This film is also full of jokes that are aimed at both adults and children - the mum's ring tone for her boyfriend is hilarious! I love how the brothers use a dog lead to pull their fathers legs around! When you combine everything in the way Pixar has with Onward you get a cinematic hit!

Overall, Onward is an emotionally charged fantastical quest that will have you thinking about it all day long! I 100% recommend this film! After years of average Pixar films, we finally have a film that reminds us why we fell in love with Pixar in the first place. I still think that there was a little something missing from Onward that stopped it being as great as Pixar's first films, repeat viewings might help me work out what it is! But I still loved Onward and I know you will too. I didn't manage to spot any Pixar Easter eggs but I can't wait for everyone to spot them. Let me know what you think in the comments.

Before you go, I just wanted to make a quick note on the Simpsons short that came before the film, I really hated this short. I felt that it gave the wrong message and showing a girl dressing herself up for a boy was highly unnecessary. I expected so much more from Disney and Pixar.