on February 02, 2020
Before I get started with the review, I want you all to cast your minds back to the release of the Dolittle trailer and remember how awe inspiring it was because sadly the trailer is the best thing about Dolittle. The film is a huge disappointment, what could have been a cinematic visual spectacle is in reality a poorly written, acted, edited, CGI bore fest full of poorly timed jokes. If you've been reading my blog for a while you will know how much I hate writing negative reviews, so I am going to keep this review short because there's no need to spread excessive amounts of negativity. Plus, Dolittle was nowhere near as awful as Cats (Check out my Cats review here). There will be spoilers, but I doubt they will ruin your viewing experience if you do decide to give Dolittle a watch. 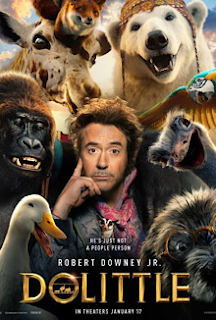 Dolittle opens with an unnecessary animated exposition telling the story of Dolittle (Robert Downey Jr.), his rise to prominence, his marriage to Lily (Kasia Smutniak) and their travels - all of this information is repeated throughout the film, it's poorly animated and honestly the story of Dolittle and his travels with Lily would have made for a more interesting movie. But instead we join Dolittle now recluse after the death of his beloved wife. We are introduced to Stubbins (Harry Collett) who after accidentally shooting a Squirrel (Craig Robinson) is led to Dolittle by Polly the parrot (Emma Thompson). We are then introduced to Lady Rose (Carmel Laniado) who tells Dolittle that Queen Victoria (Jessie Buckley) is dying and needs his help. Dolittle saves the life of the Squirrel and sets of to Buckingham palace, deduces what is wrong with the Queen and sets off on a mission to save her. Honestly, the narrative isn't even that bad, it's just poorly executed.

Acting wise this film is shocking. Sadly, not even Robert Downey Jr. can save this film from poor dialogue and poor direction. At times I even found it hard to understand what he was saying, they clearly tried to go for a Welsh accent but honestly it was so bad that I missed whole sentences. I mean my nan was Welsh and I found Roberts accent difficult. Harry Collett really let this film down, yes, his dialogue was also terrible but his acting was not good. The role of Lady Rose should have gone to a much older actress, because a child in that role did not work at all. Even Michael Sheen and Jim Broadbent where shocking. I can only deduce that the direction provided by Stephan Gaghan was sub-par and that the script offered no real emotion, characterisation, depth or connection - this film felt like it was created from a first draft that should have had multiple redrafts. The CGI animals looked great but not when they talked and as the film progressed the CGI seemed to lose quality and the animals began to look more and more animated. Whilst the personalities of the animal characters had merit, they needed more depth and narrative development.

Okay, so there were several things about Dolittle that made me say 'WHAT??' throughout, I'm going to end my review by listing these. The age of Lady Rose,  the way Stubbins could suddenly speak to animals, the deep connection between Stubbins and Dolittle which had no development they went from strangers to almost family within five minutes, the whole dragon thing was disgusting and not needed, Lily's father (Antonio Banderas) could have been her brother age wise, Polly the parrot was super condescending, there was no bad guy resolution and every joke was bad. Then there was the editing which was just awful, it jumped around so much that it was hard to connect with the characters, the narrative and even the jokes.

So, there you have it! Would I see this film again? No, but I guess I can't like every film thats ever made. Also, one thing thats super strange is the huge hype on Tom Holland voicing a character yet he's in the film for five minutes?? That's just super misleading! Let's end this review on a good note: I really loved Ralph Fiennes' Tiger Barry, that scene is great! I would advise that you give Dolittle a miss and instead watch the trailer and imagine what could have been - thats what I'm going to do.

Let me know what you think in the comments xx