on February 10, 2020
Birds of Prey (and the Fantabulous Emancipation of One Harley Quinn) is finally here! I really wasn't sure what to think of this film in the lead up to its release, I loved Harley Quinn in Suicide Squad (2016) and I was intrigued by what a solo movie could mean. I should highlight that I actually enjoyed Suicide Squad and I thought that the villains taking centre stage in the DC Extended Universe was a brilliant and different approach to creating a cinematic universe (check out my thoughts on the DCEU here). So last night I went to the cinema with my new pink hair and I can tell you that DC is onto something with its villain led movies because Birds of Prey is a crazy movie full of well craziness and I kinda loved it! I highly encourage you to see this film, go into the cinema with an open mind and enjoy the ride. I think Birds of Prey may have just changed the playing field in regards to female led superhero movies - because it's simply awesome! It's full of violence, female empowerment and superhero movie themes. Read on for my full review - there will be some minor spoilers!!

Birds of Prey made my list of most anticipated films of 2020, make sure you check that post out: https://thisisjustafilmblog.blogspot.com/2020/01/most-anticipated-movies-of-2020.html

Narrative wise Birds of Prey breaks the standard movie structure, we are taken back and forth over, and over which is actually really exciting. The film opens with Harley Quinn (Margot Robbie) talking us through her life, her relationship with the joker and their break up. The film explores Harley's life post Joker, she buys a pet Hyena named Bruce (After Bruce Wane), cuts her hair, finds her own place, parties and blows up Ace Chemicals (where she pledged herself to The Joker). Harley Quinn's destruction of Ace Chemicals announces to Gotham that she is no longer under the protection of The Joker meaning half of Gotham makes moves to kill her, including nightclub owner and villain Roman Sionis (Ewan McGregor). Harley makes a deal to retrieve a diamond for Sionis in exchange for her life, leading to her hunting down teenager Cassandra Cain (Ella Jay Basco). Throughout Harley crosses paths with Sionis' deranged hitman Victor Zsasz (Chris Messina), Nightclub singer and driver Dinah Lance/Black Canary (Jurnee Smollett-Bell), Huntress the Crossbow killer (Mary Elizabeth Winstead) and detective Renee Montoya (Rosie Perez). Whilst the narrative is crazy and engaging what makes Birds of Prey stand out is its structure, it's fun dialogue and it's fast pace which reflects the mind of the crazy Harley Quinn. 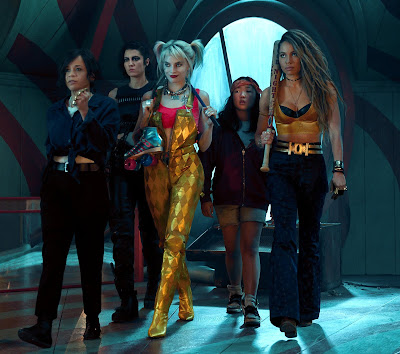 Stylistically Birds of Prey is a visual triumph. The film constant use of the blue and red/pink tones throughout is stunning. The scene where Harley breaks into the police department and walks through Blue and Red smoke is crazy cool plus the confetti canons are awesome and I wanna know how I can get one of those canon guns. The costumes are fantastic, Harley's costumes stand out especially the frilled jacket and the Harley Quinn t-shirt, but Black Canary's costumes also steel the screen with the use of comic book accurate colours. The whole Marylin Monroe tribute is one of the best scenes. The music throughout is well timed and added to the craziness, combining multiple genres to give the film emotion whilst heightening the violence and awesomeness of the action. Birds of Prey really hits its stride towards the end, when we are shown a closed down dilapidated theme park. The eerie abandoned theme park is everything I've ever wanted from a Harley Quinn/Joker movie, the contrast in colours is fabulous and the imagery of stripes and swirls, clowns and arcade games is perfect. The scene where Harley slides down a stripy slide laughing gave me chills and gives us a look at what could be in the future. I would certainly love to see a Joker film done in this style - this film highlights the missed opportunity with Jared Leto's Joker.

One reason I loved this film is the incorporation of female empowerment, Harley takes her break-up very badly, she does the stereotypical hair cutting but she pulls strength from her own identity. Margot Robbie is sensational! I loved seeing women in kick-arse fight scenes, Harley, Huntress, Black Canary and Renee all hold their own even though they are often outnumbered by men. All of the women in this film are strong, independent and supportive of each other (at times) without the film feeling forced or twee. As a woman I loved seeing these women be total badass. However, the women are not the only strength of Birds of Prey Ewan McGregor is great in his role and a perfect Black Mask, but Chis Messina shines as Victor Zsasz. I was blown away by his performance after all I had only seen Messina in The Mindy Project, I certainly hope that Zsasz didn't meet his end because I would love to see him again. 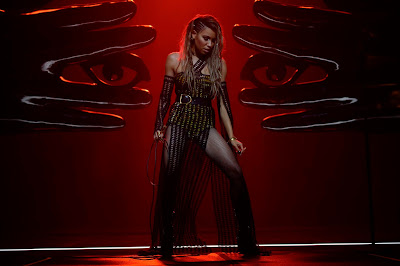 I feel like I have so much still to say so I'm just going to do a quick fire to get through it all: Roller Derby, Bruce the hyena stole my heart, the breakfast sandwich, Harley's business cards, Harley referencing Suicide Squad (Daddys little monster top and the wanted poster), the whole police department scene, the pier scene, the forming of the Birds of Prey, the onscreen character profiles and the whole party scene at the start. Also the fact that Harley gives Black Canary a hairband because her hair is in the way is sooooo relatable and I LOVED IT! The film makes strides to humanise Harley, we see her at a supermarket and living in a rubbish apartment which I loved.

So, there you have it! Birds of Prey is certainly worth a watch. I certainly think this film changes the ball game of female lead comic book movies - hopefully the success of this film will open doors and squash any resistance. I really thought I would hate the violence in this film, but I actually enjoyed it, and I was fully invested in every moment. Birds of Prey shows huge protentional for the DCEU going forward and I cannot wait to see what chaos Harley Quinn gets herself in next time.

Now to listen to the album on repeat especially the track 'Boss Bitch'.

You can Pre-Order Birds of Prey here: https://amzn.to/39KoZ2k