Jumanji: The Next Level Review

on December 09, 2019
It's time to once again journey to the jungle. I first discovered Jumanji: Welcome to the Jungle (2017) half-awake on a coach home from Disneyland Paris last year. I'd never watched Jumanji when it was released at the cinema or on DVD because I didn't think it would be my thing (I'm not a huge fan of the 1995 version) but I instantly liked it. I was lucky enough to see Jumanji: The Next Level at one of the preview screenings at the cinema this weekend and if I liked the first one then I love this one even more. Jumanji: The Next Level certainly takes things to the next level, with more laughs, more characters, more adventure and even a jump scare. There is a lot to like about Jumanji: The Next Level. Read on for my full review - there will be some spoilers so beware. (Clicks play on Welcome to the Jungle by ACDC) 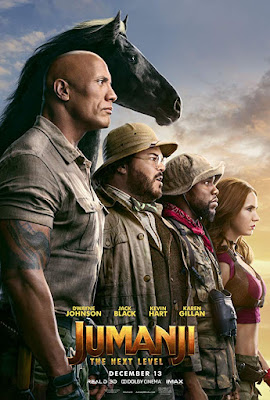 Jumanji: The Next Level begins a few years after the events of Jumanji: Welcome to the Jungle. Spencer (Alex Wolff) feeling disillusioned by life decides to re-enter the game in order to feel the strength Dr. Bravestone (Dwayne Johnson) gave him. Upon realising Spencer had entered the game Fridge (Ser'Darius Blain), Bethany (Madison Iseman) and Martha (Morgan Turner) decide they have to rescue him, however the game leaves Bethany and instead takes Spencer's grandfather Eddie (Danny DeVito) and his friend Milo (Danny Glover). When the group enter the game, they once again take the forms on the in game avatars. Martha returns to the body of man killer Ruby Roundhouse (Karen Gillan), Fridge become Professor Shelly Oberon (Jack Black), Eddie becomes Dr. Bravestone and Milo takes on the avatar of Bag pack guy Mouse Finbar (Kevin Hart). The group set off to find Spencer who has become new avatar Ming (Awkwafina) a lockpicker. Bethany determined to get into the game calls upon Alex (Colin Hanks) and the pair eventually make it into Jumanji, Alex once again takes the form of pilot Seaplane (Nick Jonas) and Bethany takes the form of another new avatar Cyclone a horse. What follows is high intensity action, body swaps, laugh out loud comedy, a jump scare and a surprisingly emotional storyline. Each avatar has either added strengths or weakness which help them face the new areas of Jumanji they journey too. This film is called 'The Next Level' for a reason, the game levels faced by the characters are a whole new ball game and I found myself wishing each character had five lives instead of three. Jumanji: The Next Level builds upon its predecessor in a way that makes it a fresh, exciting frill ride.

What makes Jumanji such a great watch is its characterisation. There are at least two actors playing each character throughout, each actor is believable in their embodiment of Spencer, Bethany, Fridge, Martha, Alex, Eddie and Milo. This film would not work unless all of the actors made sure the audience knew who they were at all times, this is tested though the film as there are several body swaps. Now let's discuss Jack Black, I feel like we should talk about what a great actor he is more, not only is he great at portraying a young popular woman (Bethany), he also does a great job of Playing Jock Fridge, Jack Black shines throughout. Dwayne Johnson is a complete surprise in this movie, we all knew that he is a versatile actor, but he is great at portraying grumpy, hot-headed grandfather Eddie, he is believable the whole way though. Similarly, Kevin Hart's portrayal of Milo is brilliant - especially the slow talking, but it's really great when he once again becomes Fridge. Karen Gillan is once again a total Queen!! Her portrayal of Martha and later Fridge are both on point. Nick Jonas is once again great, this time playing an older version of Alex his line calling the group 'kids' is brilliant considering Nick Jonas is the youngest of the Jumanji avatars. Newcomer Awkwafina dives straight into the deep end playing both Spencer and Eddie and I have to admit she is brilliant and takes on both personalities seamlessly. 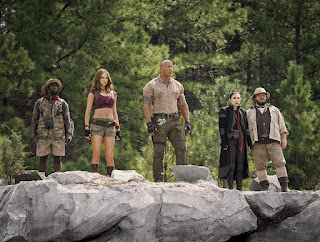 There is only one thing I didn't love about this film and that the dessert scenes, they just looked so obviously CGI which is a real shame because the rest of the film looks so believable. But that is literally the only thing I didn't love. The soundtrack is great, the visuals other than the desert are rich and full of detail. The costume department got to flex their wings this time around by creating brilliant snow costumes. The fact that we get to see more of what Jumanji has to offer world wise is great and the cliff hanger at the end hints that there may be more to see. Also, the scene where they all swap bodies and 'Welcome to the Jungle' by ACDC plays is so perfect and everything I ever needed in a film! I love how the film builds upon relationships especially between the group but also between Martha and Bethany and Bethany and Alex. Eddie and Milo add another level to the story which is unexpected but emotional and a great addition. The horse Cyclone is brilliant and if I was in Jumanji, I would so choose to be Cyclone because who wouldn't want to be a flying horse (at least for a little while). I really really enjoyed this film!!

So, there you have it: Jumanji: The Next Level builds upon the first film to create a brilliant thrill ride. It really felt like I was watching a second instalment to a video game, that was harder and more creative than the first. The combination of narrative and dynamitic actors create an enjoyable movie that I certainly recommend. This film would get all the stars for its enjoyability factor alone. Make sure you go and see this movie - it's out fully on Friday 13th!!

Please let me know what you think in the comments.

Buy Jumanji: The Next Level by CLICKING HERE 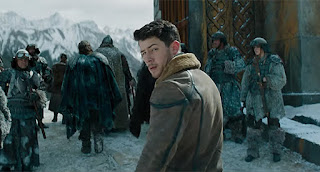