on September 10, 2019
Last year I was lucky enough to work on Downton Abbey! This was such an amazing and exciting opportunity, an experience that I will never forget. At the weekend I was able to attend the cast and crew screening of the film in London! Which was so so so exciting and I even got to sit right next to the director - how cool is that?! I'm incredibly happy to be able to share this review with you all and I would love to know what you all think so make sure you leave a comment and I will get back to you. A little bit of Downton Abbey history, Downton Abbey originally aired on British TV in 2010, the show lasted for six series and ended in December 2015. The show follows the House Downton Abbey and it occupants the Crawley family and their staff. I loved this show so much, I used to watch it in my PJ's with hot chocolate and marshmallows every Sunday night. So, I was thrilled when a movie was announced, and then I got a job on the crew and I got to read the script and see what happened behind the scenes and it was like a dream come true. So, I guess the real question is: does the movie live up to the TV show? Read on to find out!!! (Spoiler free) 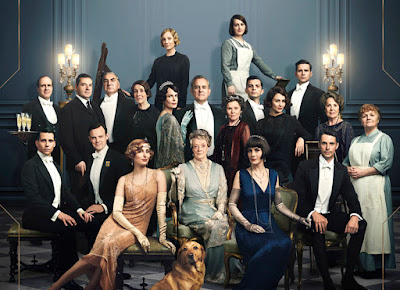 The film picks up in 1927 two years after the events of the final episode. The film opens with a letter being sent to the Crawley family from the King (Simon Jones) and Queen (Geraldine James) who wish to visit Downton Abbey on their tour of the country. The film has a rather simple narrative and focuses on the royal visit; preparations need to made for the stay, a dinner and a parade. The staff are displaced by the royal staff, Carson (Jim Carter) returns from retirement and plans are made. Although the narrative is pretty straight forward it is charming and everything we could ever want from a Downton Abbey movie, it is quintessentially British, demure and enchanting, whilst also tackling social issues such as class, gender, LGBT rights and political issues that revolve around the Monarchy. This films very heart is relationships and emotion, something that is lovely to see on the big screen. I must admit I loved the narrative, it translates well to screen, it's hilarious at times, heart-warming and sad, there is one moment that is so awkward that it makes you feel uncomfortable! A film that can make you feel emotion is a triumph in my books and Downton Abbey certainly makes you feel. 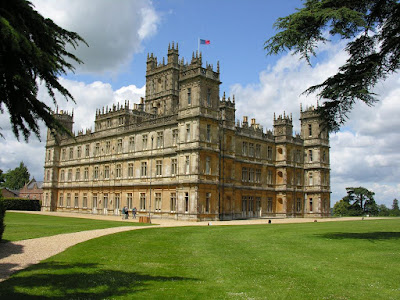 The film at times comes across in my opinion as a love letter to the original TV series, we are reintroduced to the world and characters with long, lingering shots of Highclere Castle (Downton Abbey) both inside and out. The film makes us reminisce on past events and moments from the show which for a super fan like myself is part of the charm. The film makes use of the original soundtrack which is perfect and helps us re-enter the world. The combination of these long swooping shots and soundtrack are enchanting and the pull you into the sanitised world of Downton Abbey, a world that is so full of morals and class that it makes you wish to enter the screen and join one of the fantastic dinner parties. Whilst the film adds new characters, the characters we all love are still at the very centre of the narrative - how could they not be. Lady Mary (Michelle Dockery) is once again the centre of the film, she is an inspiring character and her relationship with grandmother Violet (Maggie Smith) is so believable. Violet once again rules the screen with sassy one-liners, Lord and Lady Grantham (Hugh Bonneville and Elizabeth McGovern) are at times adorable but do take more of a back seat. Old storylines are dug up surrounding Tom Branson (Allen Leech) and Edith (Laura Carmichael) is once again facing her own dramas. The staff including my favourites Anna (Joanne Froggatt), Mr Bates (Brendan Coyle) and Elsie (Phyllis Logan) show dedication in their work even in the face of adversity and work together to ensure justice. Thomas (Robert James-Collier) is treated rather badly throughout the film which is a little disappointing but towards the end he gets a little happiness which redeems his storyline. I must admit it was nice to be back with these characters, it was like we never had four years without them on our screens. 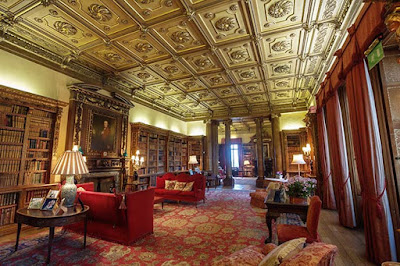 One thing that sets Downton Abbey apart is its commitment to authenticity and its incredibly rich production value. Having spent time working on this film I can tell you how much time, thought, dedication and talent that went into creating everything we see onscreen. The costumes are historically correct, each is full of intricate details including beading and embroidery. Each costume is perfectly matched with accessories; hats, gloves, real pearls, diamonds and period accurate shoes. Hair and wigs are styled to perfection. Then we have the sets, I have visited Highclere Castle which plays Downton Abbey and I can tell you it is stunning! So, imagine filming in a stately home where you have to be careful to not ruin anything, then there is the sets, such as the kitchens and Buckingham palace. Each scene is full of props each of which was selected and placed with thought. All of these details add together to create the wonderful mise-en-scene that we see on screen and this attention to detail shines out and that is what makes Downton Abbey so special. It's not visually stunning because of CGI but because of real props, handmade items, costumes and real sets. 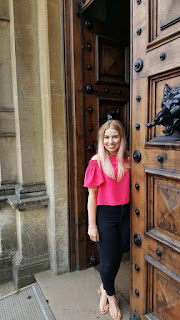 Overall, I think Downton Abbey's big screen debut is worth a watch. I guarantee you will leave the cinema with a big smile on your face. Some of you are probably thinking there is no point going to see this film at the cinema, that they should have just made another series but I can tell you that Downton Abbey is well worth a cinema trip, there is something so great about watching this film on the big screen. I will certainly be going to see this film again once it is released at cinemas and I really hope that there is the opportunity for more films because I'm not ready to say goodbye to the Crawley's, the staff and Downton Abbey. Downton Abbey is a quintessentially British, wholesome and pure movie.

Please let me know what you think in the comments!!