on August 21, 2019
I know I'm super late, but I finally saw The Lion King at the cinema last night. Normally if I saw a film this long after its release, I wouldn't bother writing about it because everyone else would have already beaten me to it. But I absolutely loved The Lion King! So, I have decided to put the original 1994 version in the metaphorical boxing ring with the 2019 version! This post won't be a straight up review, it'll be a battle to the DEATH...okay so maybe that's a bit dramatic but I'm sure you get the idea. Before I get to it, I want to ask if the Disney Castle opening is like a one off or a new version because wow it's bad!! If you know please leave a comment because this kept me up last night! So, without further ado let the battle commence in...3...2...1!

Make sure you check out my other articles here: https://thisisjustafilmblog.blogspot.com/ 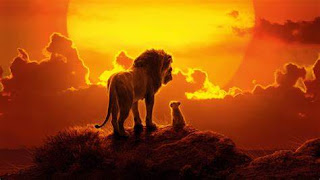 The 1994 version is a classic Disney animation, and as far as visuals go the film brings to life Africa and its animal inheritance in a wonderful cartoon way. Whereas the 2019 version is a photorealistic computer animated work of art! I thought this film captured animal movements perfectly. Everything in shot was perfectly textured and so rich with detail. I felt like I could walk through the screen and arrive in Africa. Visually the 2019 The Lion King Wins! Points stand at 0:1! 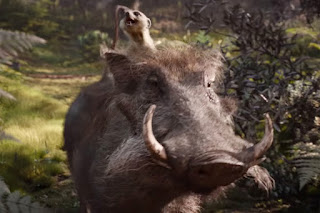 Round Two: Timon and Pumbaa

Timon and Pumbaa were mine and my brothers faviourte characters growing up! They are The Lion Kings much needed comic relief and they give Simba a life of carefree chilling (something he needed in order to become the best version of himself). So which Version of Timon and Pumbaa is better? This is a very hard choice because both versions are brilliant. However, I have to give this round to the 2019 versions, I just found them so funny, relatable and sassy. I loved the Fixer-upper/Carcass joke (although I was only one of like three people laughing). I loved how Pumbaa would not let anyone body shame him! Timon was also hilarious, I loved how he would blame everything on Pumbaa! So, the points stand at 0:2! 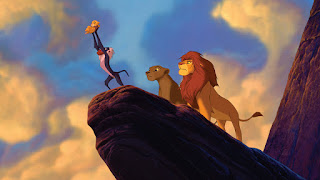 The Lion King is regarded as a musical masterpiece and Disney's strongest Musial film and it's easy to see why. The 1994 version gave us so many classics that we all listen to over and over! You can deny that you don't sing your heart out when 'Circle of Life' comes on the radio if you want, but you know you do. 'Hukuna Matata' is another great song that many of us use to stay positive. For these reasons it was strange hearing these classic songs sung by other people. Don't get me wrong I love the 2019 versions, Beyonce and Donald Glovers' version of 'Can You Feel the Love Tonight' was a dream, as was Billy Eichner's and Seth Rogen's 'A Lion Sleeps Tonight'. But I hated how each time we got to the end of the singing in 'The Circle of Life' the film would cut to a boom and show The Lion King! Like both times I was getting ready for some extended orchestral notes but nope we got a BOOM! So, for these reasons the 1994 version wins!! The points stand at 1:2! 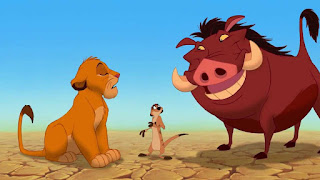 Disney have always liked to leave Easter eggs and The Lion King is no exception. In the 1994 version there are hidden Mickey heads and Zazu mentions 'It's a Small World'. In the 2019 version, Timon starts to sing 'Be Our Guest' From Beauty and the Beast! When this scene came on, I was sooo excited! So, for that reason the 2019 version claims victory! The points stand at 1:3! - All is still to play for. 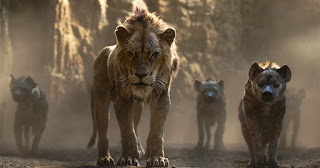 So, the 1994 version set a pretty dark tone at times. Scar is a pretty dark villain and the way he murders Mufasa is as dark as you can get, the Hyena gang is terrifying especially when they do that whole Nazi inspired dance/march. The 2019 Version takes the dark tone even further, the Elephant graveyard is bleak, and the Hyena laughs sent shivers down my spine, plus that last Scar scene where the Hyena's maul him to death. When you include these dark elements you have to balance the narrative and I feel that the 2019 version took the darkness a little to far. So, the point goes to the 1994 Version. The points before the final round stand at: 2:3!

The Lion King has a lot of defining qualities but if you talk to anyone about The Lion King the conversation always comes back to how emotional it is. The film balances Happiness with sadness and teaches people about death, loss and acceptance. I think that both versions capture the emotion perfectly, last night I knew Mufasa's death was imminent and I wanted to leave the cinema - that is the power of this film and Mufasa's death in particular. I know that a lot of people found it hard to connect with the characters in the 2019 version but I disagree I actually felt more emotion. I was overwhelmed at the start of the film and then throughout I laughed and cried and wanted to sing along. As much as I love the 1994 version I think I prefer the 2019 versions ability to capture emotion.

The final score for this battle is...Drum roll please!!!

Overall, I loved The Lion King and if you've not been to see it then make sure you do - even if you are not a fan of the narrative or the original. This film is a visual spectacle full of life, it is also the start of a new style of movie, one that is completely computer generated which makes the possibilities of cinema more endless than they have ever been and I cannot wait to see what comes next. Director Jon Favreau has created something historic!

Both versions are great, and you know my winner - please let me know what version you prefer!!