on July 03, 2019
Is everyone over Avengers: Endgame? Because it's time for Spider-Man: Far From Home!! So, the great thing about this movie is: I went in totally heartbroken and still emotional after Endgame (even though it's been a few months), I really didn't want to move on and see what the MCU had in store for the future. But in a way Spider-Man: Far From Home takes us almost full circle, it allows us to grieve and move on. I left the cinema super excited for the future of the MCU! Sadly, this is the first Marvel movie to not feature a Stan Lee cameo and he is missed. Read on for my review, I am very excited about this film, so please leave a comment or get in touch because I would really like to get a debate going on - there is just so much to discuss. Read on for my full review - THERE WILL BE SPOLIERS!! 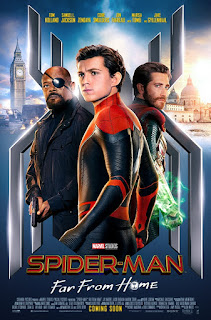 Peter Parker (Tom Holland) and his friends are all back in another Spider-Man adventure, the five-year time jump is explained at the very start of the film which clears that whole issue up. The film opens with a school news blast showing us everyone we lost in Avengers: Infinity War/Endgame (try to not cry). Peter and his friends: Ned (Jacob Batalon), MJ (Zendaya) and 'nemesis' Flash (Tony Revolori) prepare for and head off on a European school trip (I wish my school trips has been this awesome) but not before Peter decides to ghost Nick Fury (Samuel L.Jackson). Once we arrive in Europe, we are introduced to the presumed bad guys of the movie the Elementals and new hero Mysterio/Quentin Beck (Jake Gyllenhaal). Beck revels he is from another earth where he fought and lost to the elementals, he has now teamed up with Fury, Mara Hill (Cobie Smulders) and co to defeat them. Peter gets caught up in all the chaos but declines Fury's to join the fight. Peter instead just wants to take a holiday away from the superhero life and to tell the girl he likes how he feels. He does however end up getting involved after Fury meddles with the school trip. The film is a great mix of teenage life and superhero life which blend together perfectly. I went into this film expecting twists and we got them just not in the way I thought which was so brilliant because the movie keeps you on the edge of your seat! (The Game of Thrones producers could have learnt a lot from this film!).

So, there was a few little things I wasn't particularly fond of. I felt that some of the jokes in the first 30 minutes or so where a little flat and at times even forced which is a shame as we have come to expect effortless jokes from MCU movies. I am also not a huge fan of MJ throughout, I liked her character in Spider-Man: Homecoming (2017), but for some reason I found her the weak point in the film this time. I love the relationship between Peter and MJ but I just felt like there was something missing maybe performance wise this time around. MAJOR SPOILER TIME. So, no multiverse which sucks!! I got so excited to the possibility of multiple earths it would have opened up the possibility for Tony Stark (Robert Downey Jr) and Black Widow (Scarlett Johansson) to return if needed. Don't get me wrong I love the direction the narrative took with Beck being a disgruntled ex-employee of Stark Industries. But a Multiverse would have just been so cool! But other than those things I pretty much loved everything about this film!

I loved Mysterio and the simulations he created, when he really gets into it he gets going and DAMN! That whole sequence when we get to see what Mysterio can do is possibly one of the greatest and most unique moments we have ever seen in the MCU! I wanted more, I was in awe and I totally had nightmares last night about Tony Stark rising from the grave! I also loved that the film basically says 'Spider-Man will not be filling the gap left by Iron Man' but it shows us that he will be! And in my faviourte scene of the whole movie it becomes very clear that Tom Hollands Spider-Man is a key part of the MCU going forward and that scene is the plane scene where Spider-Man is creating a new suit and first of all he does the same hand movement as Tony in Iron Man (2008) and then Happy (Jon Favreau) is watching Peter build the suit just as we are and he smiles and then he puts ACDC on and I nearly jumped out of my seat I was so happy!! Honestly I loved all the mentions to the previous films such as: Peter swings by the Battle of New York site, Happy throws a shield and questions how Cap does it, the narrative links to Iron Man and Civil War (2016) - these all just made me think about how much I have loved the MCU since the very start. I loved the relationship between May (Marisa Tomei) and Happy - honestly, I just love Aunt May so she needs way more screen time!!

Both Tom Holland and Jack Gyllenhaal give fantastic performances! I am sad that we won't get to see Mysterio again because I think he could be a great villain time and time again. So, let's talk after credit scenes - first of all there are two so if you haven't seen both I advise that you stop reading NOW! Okay so the first introduces us to the DailyBugle.net with J. K. Simmons reprising his role as J. Jonah Jameson (I was so happy they decided to keep Simmons! because he is perfect for the role). Just like the end of Iron Man, Spider-Man's identity is revelled, but I wonder how many people will believe that Peter Parker is Spider-Man and how many will believe that he killed Mysterio? It certainly opens us up to so many possibilities. Then there is the second scene where Talos the Skrull from Captain Marvel (2019) is revelled to have been impersonating Fury on Fury's orders all along. And now this certainly opens up so many opportunities including Secret Invasion, plus how many times has Talos taken on the appearance of Fury? AHHHH I AM SO EXCITED!!!

Please let me know what you think in the comments.

Even Dead I'm the Hero.