London Film & Comic Con, Plus an Interview With Devon Murray

on July 29, 2019
On Saturday I attended my first ever Comic Con thanks to Showmasters Events. I honestly still cannot believe I was lucky enough to get a press pass for this event after not even two years of blogging! This post is going to be focused on my experience at London Film and Comic Con (LFCC) where I got the chance to conduct my very first interview, which was terrifying!! Please let me know what you think in the comments below and read on to find out more. 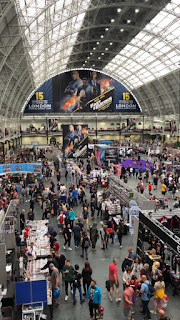 I first arrived at Olympia London in pouring hard rain, there was a two-hour queue to get into the show but because I had a press pass I was lucky enough to walk straight in and avoiding the queue. I got handed a Press wristband that I kept looking at just to make sure I wasn't dreaming. Because I'd never attended an event like this before I had no idea what to expect but I can tell you I was not disappointed! LFCC is a huge event that brings together so many movie and comic book fans. The talent some of the cosplayers have is unreal, honestly some of the costumes I had to look twice at! One lady had created the most incredible Hela costume I was actually scared her headdress might poke an eye out. I started off just wandering around trying to figure out where everything was, but the event was so big that I missed the Harry Potter talk I wanted to attend because I could not find the second stage. So whilst I waited for the next talk I planned to attend I had a look around the stalls, if you wanted to buy something TV/ movie/comic book or game related you could find just about anything here, you name it they had it!

But the main attraction of these events is the Stars, at LFCC you are able to meet people that you watch on the screen. You can get an autograph or a photo with them for a price. Now some of the prices for autographs are extortionate, I will never understand how a piece of paper with a signature on can cost upwards of £90. And the price of a photo is even more! But I suppose if you have always wanted to meet someone then these prices do not matter because you are after all meeting your idol. It was exciting to see the people that I watch in movies but I am not sure you could ever convince me to spend that type of money just to meet them. What was cool is how the stars just walk straight past you, both Jessie Cave (Lavender Brown from Harry Potter) and Mathew Lillard (Shaggy from Scooby Doo) just walked straight past me and then out of nowhere Jason Mamoa (Aquaman and Game of Thrones) walked right next to me and then just turned round and waved! I was so shocked that I didn't even get a photo all I could think was 'We have the same hair scrunchie!'. 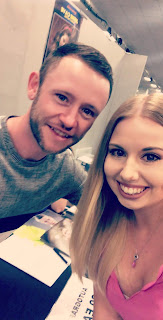 When you get a press pass for LFCC you are expected to get interviews with the guests in attendance, something that I had never done before. So I spent a lot of the day trying to get interviews with no luck because all of the guests were so busy, at one point I thought I had scored one with Star Wars' Hayden Christenson, the staff member took in my business card, he had only four people in the queue and ten minutes later the staff member came back handed me my card and said no. At this point I felt really hopeless and the days rejections started to get to much, it was at the point that I managed to get my very first interview. I managed to get a chat with Harry Potters' Seamus Finnigan, Devon Murray and honestly considering Harry Potter is to blame for my obsession with the movies I could not have interviewed a better person. Now I should have voice recorded the interview, but I was so nervous I forgot and my hand was shaking so much that my notes are all wobblily.  So, here is what I managed to take down:

What was your faviourte thing about filming Harry Potter?
What would be your dream role?
What are you up to now?
What do you like most about events like this?
Who is your Favourite Disney Princess?
Devon Murray was even nice enough to take a selfie with me, I genuinely could not have asked for a better first interview, it felt like we were just having a nice chat not a forced question and answer session.

There were several other great things about LFCC! I got to sit in the third row for the Jason Isaacs (Lucius Malfoy from Harry Potter) talk. He was so awesome he didn't even need a host to run the talk! I could have listened to him talk for an hour. I learnt that he originally auditioned for Professor Lockhart in Harry Potter but instead got asked to read for Lucius. He couldn't tell us if he was going to make an appearance in the next season of Star Trek Discovery. He did reveal that he doesn't choose to play bad or good guys he chooses to work on good scripts! I really loved the vibe of the event as a whole there was a great mix of people in attendance which was brilliant. There was a whole Star Wars zone which was pretty awesome. The whole event was sponsored by Fast and Furious Hobbs and Shaw which meant The Rock was watching over the whole event. 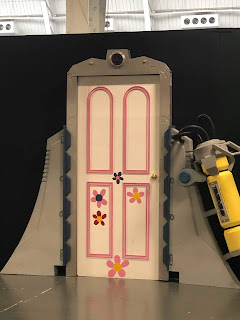 There was a few things that I did not like. I thought it was ridiculous to ask people to pay £10 for a photo with a replica of the Iron Throne, the door from Monsters Inc and some angel wings. I asked and the cost was still the same if you wanted them to take it on your phone. There was apparently a DeLorean but I could not find it anywhere. I also think that the event could be made better if there was a costume, set and props section. It would be great to see some real movie artefacts. I also think that the area around the stars so the autograph tables and the photo booths could have benefited form a little more organisation and a little more clarity for press.

Overall I had a fantastic day at London Film and Comic Con and I cannot wait to attended another event soon. I still cannot believe how lucky I was to get a press pass and an interview. I just hope that next time I interview someone I am not shaking like a leaf and remember to record it. I even managed to get a comic book signed by the artist Fraser Ivring which was awesome and he was even happy to pose for a photo! Thank you for a great day LFCC, Showmasters and Universal Fast and Furious Hobbs and Shaw! 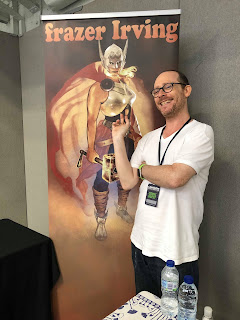 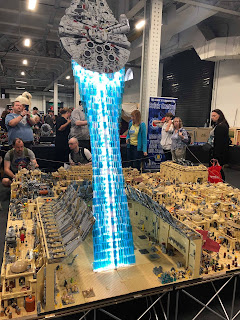