on June 22, 2019
To Infinity and Beyond! Our faviourte toys are once again at the cinema. I was so ready to re-join Woody, Buzz, Jessie, Slinky, Bullseye, Rex and Co on another adventure. Toy Story has been around my whole life and the first three are some of my all-time faviourte movies, so I guess the big question is: Does Toy Story 4 hold up to the first three? Simply put no Toy Story 4 is nowhere near as good as the original 3, it's not a bad movie but it's not brilliant. It has some laughs, an emotional moment and even a jump scare but it lacks something. Please read on for my reasoning and let me know what you think in the comments below. There will be spoilers (like a lot of spoilers). 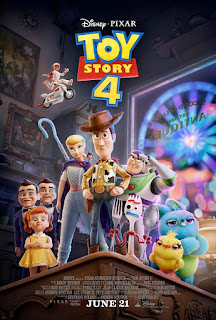 After the traumatic and fantastic events of Toy Story 3 (2010) we all thought Toy Story had come to its natural end but Disney and Pixar had other ideas and we got Toy Story 4! Now I was sceptical when it was announced and then I saw the first trailer and I still wasn't sure but over the last two weeks I got caught up in with all the Toy Story fever (if anyone wants to buy me the Toy Story dolls I'd be very grateful). The film follows Woody (Tom Hanks) and his life now that Bonnie (Madeleine McGraw) is his child. Woody is adjusting to life; he is no longer the faviourte and he clashes with the leader of Bonnie's toys. On Bonnie's first day of Kindergarten she makes Forky (Tony Hale) a toy made from a plastic spork. Woody takes responsibility for Forky, ensuring that he is safe. Bonnie, her parents and the toys end up on a road trip which leads to Woody discovering Bo Peep (Annie Potts). Woody, Buzz (Tim Allen), Bo Peep, Forky and a whole lot of new characters go on an adventure which results is possibly the worse ending I have ever seen. My big issue with this plot was the lack of screen time the original characters had, the film introduced far to many new characters and forgot about our original favourites. The Narrative also allows little time for us to connect with the new characters, I feel like we barely know Bonnies toys! We needed a ten-minute segment of them working as a team or something that showed off their dynamics before more new characters where introduced. I also found the film a little jumpy, the script had lost its brilliant original style which was sad.

There were somethings I really liked about this film, for example I loved the references to other films! There is an Iron Man lunch box, there is a reference to Star Wars, the petrol station is called Dinoaco (Cars), there are also little references such as Elastigirl's motorbike (The Incredibles 2) and Merida's (Brave) family crest on a plate. I got so excited when I saw the Polly Pocket! I loved Polly Pockets as a child. I know I said there was far too many new characters but I did actually really like three Ducky (Keegan-Michael key) and Bunny (Jordan Peele) where a great double act and their plans where hilarious. Duke (Keanu Reeves) was brilliant and I thought he had a great background and character depth that made him instantly likable. Then there's the new Bo Peep and I loved her. She is tough, independent and inspiring. Her character development is perfect and believable, she chose to go out and live life for herself rather than wait for a child to love her which I think is amazing. I loved the moment we first meet Gabby (Christina Hendricks) and her creepy henchmen it was so scary! I also loved the first scene where we are taken back in time and the gang have to rescue RC from the rain. But this scene was actually the best moment in the film - this scene was like something straight out of the first two films and it highlighted everything Toy Story 4 didn't have.

So the Downside to introducing all these new characters was that original characters such as Rex (Wallace Shawn), Slinky (Blake Clark), Bullseye, Mr and Mrs Potato Head (Don Rickles and Estelle Harris), Ham (John Ratzenberger) and Jessie (Joan Cusack) got very little screen time. RC showed up in the first scene but never again, Barbie had a reduced role again only showing up in the first scene (I love Barbie so I hated that she was barely in the film) and then others such as the Toy Soldiers and the Aliens are not even in the film!! Like what even!! Its such as shame because these are the characters that made us love Toy Story to begin with. I also felt like there was a huge Andy shaped hole in this film, seeing that ANDY was no longer on Woody's boot was heart-breaking. I missed the whole dynamic from the first three films. Bonnie seemed like the perfect child to take the toys but in this film, I just found her annoying and we never really see her play with the toys, which is sad. Throughout the film we see Bo Peep use a red hand thing and I thought 'great they are going to give that to forky as it's nicer than the pipe clear' but nope. I also thought there was potential for a 'claw' scene in the theme park, also how great would it have been if there had been a Lotso bear on the game stand that Buzz gets tied to! Buzz could have freaked out and the Lotso bear could have been like a nice version that had no idea who Buzz was!! Gabby should have given Woody his voice box back. I also hated how many times the story took us back to the antiques shop. Then theres the ending, no way would Woody have left Buzz! Bo Peep and the new characters all should have gone with Bonnie!

Overall in my mind Toy Story should have ended with Toy Story 3, it was the perfect ending and I really hope they never make another Toy Story film. I hate being down on films, but I just could not help it! If I am being totally honest at about halfway thought I found myself enjoying the film - it was funny and nostalgic and then there was that awful ending, but it was only after when I was comparing it to Toy Story 1-3 that I realised that this film lacked the magic and imagination the first 3 managed to capture.