on May 17, 2019
'Oh, that's a twist. That is very twisty.' The words of Pikachu best sum up this twisty turney movie. I remember the first time I heard about Detective Pikachu, I had stumbled across some filming taking place in London and me being me went and spoke to a member of the crew who told me what they were filming. So, I saw Justice Smith filming a scene that made it into the finished film which got me super excited in the cinema. But at the time I honestly thought that a live action Pokémon movie would never work, however it does work and its pretty great. Detective Pikachu is the very first live action Pokémon film and I am certain it won't be the last, I'm so ready to see Ash, Misty and Brock in their own live action movie. Read on for my full review: there will be spoilers!! 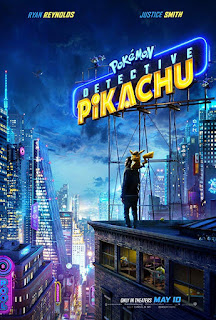 Detective Pikachu follows insurance salesman Tim Goodman (Justice Smith) who finds out his father has died in a car crash whilst working a case. Tim has a distant relationship with his father Harry (Saying who plays Harry would be a major spoiler) who works as a detective in the fictional city: Ryme City where Humans and Pokémon live in harmony. Ryme City was created by Howard Clifford (Bill Nighly) as a modern place to live, where Pokémon battles are banned. Tim travels to Ryme City in order to sort through his father's things. On arrival at his father's apartment he meets intern reporter Lucy Stevens (Kathryn Newton) who tells him Harry was following a lead and that his death seems suspicious. Tim after discovering a toxic gas in his father's apartment teams up with the hilarious and adorable Pikachu (Ryan Reynolds) in order to find out the truth. The film continues on to provide us with surprise twists and mysteries. I would say that at times the dialogue was a little wooden however it does not detract from the film as a whole and the main characters all have great dialogue. Honestly, I never expected such a great and engaging story.

So, the big question is - Do the Pokémon look real? Yes, they are so believable I came out of the cinema expecting to see Pokémon. I was even tempted to re-download Pokémon Go. I loved the mixture of CGI and physical set; it made the locations of the film seem real - which is great considering the film is set in a fictional world. Each frame of the film is so full of details and movement which makes it a visual spectacle. I also loved the fact that they didn't completely CGI the city buildings, London shines through which is great. Justice Smith did a great job in his role epically considering most of his scenes are with a CGI character. Plus, I will never get bored of his scream. Kathryn Newtons' Lucy takes some time to warm up, her first scene comes off a little cheesy, but she soon becomes a crucial character. The real show stealer is of course Ryan Reynolds' Pikachu. He is so funny and cute and ugh I just wanted to hug him. A lot of his jokes are aimed at adults which makes sense given the films 12 rating. Pikachu is again the most awesome Pokémon, I'm glad he couldn't remember how to use his powers because it added another layer to his character, and it made it more power when he finally remembers how to use the lightning.

Several scenes really stood out to me. The first is when we meet Tim, he is trying to catch a Pokémon, he throws an awesome looking Poke Ball, it looks the like Pokémon is captured and then BAM! The Pokémon springs free and attacks. This scene took me straight back to my childhood when I would play Pokémon on my Nintendo DS and I would see a Pokémon I really wanted like an Evie or a Pontya and I would throw the Poke Ball and then they would get lose and run away. It is also great fun to see all the different types of Pokémon, I spent a lot of time trying to remember their names and powers. That's what's so great about this film it's so relatable to anyone that has ever played/watched Pokémon. At one moment the film made me jump out of my skin, I am not normally one to jump at a film, but this film got me. Okay I need to get this off my chest there is one scene that really bothered me, at the end of the film Tim throws a train ticket away, he just puts it in the bin. Like why not get a refund, or exchange it, are train tickets not expensive in Pokémon world? I would have liked to have seen more Poke Battles, mainly because the ones we see in the film are so awesome! I was left wanting more.

Detective Pikachu is hands down one of the best video game adaptations I have ever seen. I honestly really enjoyed this film. Detective Pikachu creates a believable world, realistic Pokémon and is full of narrative twists. It is a brilliant and visual experience full of laugher and shocking moments. I will be buying this when it comes out on DVD. Please let me know what you think in the comments below.

Thank you for reading x
Check out some of  my other posts here: https://thisisjustafilmblog.blogspot.com/