on May 22, 2019
Aladdin is the latest of the Disney live action remakes. It follows Cinderella (2015), Beauty and the Beast (2017) and Dumbo (2019); two of which I liked and one I didn't. So, did I like Aladdin? Yes, most of it. Aladdin first graced our screens in 1992 and it left a lasting impression. I am a huge fan of Disney Princess movies including Aladdin, as a child I always wanted a pet tiger just like Rajah, so I was very much looking forward to seeing a live action movie. I had my doubts before entering the cinema today mainly because I thought it would never be able to live up to the original, but I think when considering these Disney live action remakes it's important to separate yourself from the animated versions and not compare the two; at the end of the day it's very hard to compare a live action film to an animated one. Please read on to see what I thought, this is your spoiler warning!! 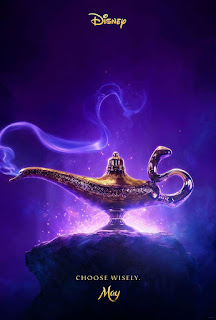 The film opens with the Genie (Will Smith) singing Arabian Nights as we get our first glimpses of Agrabah, we see Aladdin (Mena Massoud) and Abu walking through the streets, we see the palace where Jasmine (Naomi Scott) and Rajah are, we then follow Iago (voiced by Alan Tudyk) flying over the desert to the Cave of Wonders where Jafar (Marwan Kenzari) is trying to get the lamp. It's a brilliant opening sequence. We are then properly introduced to Aladdin who is steeling to eat, he meets princess Jasmine as she wanders the city undercover. The film progresses much the same as the animated version Aladdin gets the attention of Jafar who realises that Aladdin is the Diamond in the rough. Aladdin gets sent into the Cave of Wonders to retrieve the magic lamp, once inside the cave we meet the flying carpet. Aladdin manages to grab the lamp and summons the Genie. Aladdin plans to find a way to marry Jasmine, Jafar plots, Jasmine fights against the time period, the Genie wants freedom, Rajah is the cutest pet ever. Narrative wise I think the film had huge potential, I really thought Jasmine was going to become a champion of the people and solve the starvation problem for example. Plot points were set up but not really followed through which was a shame. I recently Read the book Aladdin: A Whole New World - a twisted tale by Liz Braswell and I think it would have been great if the movie had incorporated some of its narrative points. But overall the narrative is still enjoyable, just with a little less padding than we have come to expect from the live action remakes.

Aladdin is visually impressive, there is so much colour and texture on screen that it's almost mesmerising. The sets are polished, perfectly formed and full of colour which create a believable magical land. The costumes are incredible, I want to wear all of Jasmines dresses! I really wasn't sure about the hood on Aladdin's jacket, it just seemed a little to modern. But the attention to detail in each costume and set is stunning, it must have taken so much time and talent to produce especially considering the amount of sets, props, extras and costumes. The prince Ali parade is perfect, each frame is full of movement, glitter, flowers, colour, I really loved it! The musical numbers are fantastic, from the music to the choreography. The film even references fantasyland which is perfect considering Agrabah is the perfect fantasy world. The score is also pretty perfect, I think at times it's really powerful and helps create the world. I have always said that a score can make or break a film and the score certainly makes Aladdin. Edit wise Aladdin is pretty normal, nothing to flashy, great fast cuts and beautiful movement especially during the musical numbers however during the Street Rat song when Aladdin and Jasmine are running from the guards the film speeds up. It's just a really strange choice that pulled me out of the film, speeding up the scene didn't really make any sense.

I have seen a lot of people questioning Will Smiths' Genie, people need to see the film before they make up their minds because Will Smith is perfect as the Genie. His portrayal is completely different to Robin Williams' so it is hard to compare the two which I think is brilliant, Smith brings his own style to the role. We all knew Smith could sing, his versions of Arabian Nights and Friend Like Me are really enjoyable. Smith is hilarious throughout; he is the perfect Genie. Mena Massoud is a great Aladdin, he is instantly likeable and funny (I have never laughed at jam this much before), we go on a journey with him. Naomi Scott portrays a modern Jasmine; she is an incredible singer and a great role model! Her best friend Dalia (Nasim Pedrad) is hilarious and a great original character. I think the cast have great chemistry and acted brilliantly with the CGI animals Rajah and Abu. Honestly everyone on screen has such talent, they can sing, dance, act and their performances are what make this film a brilliant watch. However, I really didn't like Jafar, Marwan Kenzari looks great and even sounds great but I just did not find him scary. I thought he was great once he had become an all-powerful sorcerer and then not very convincing when he became a Genie, maybe I missed something but for me he should have been scarier or more of a threat, but I did like the fact that he had a back story. Also, the film had a few cheesy moments which I am not a fan of but then again the original Aladdin had its cheesy moments, so maybe cheesy comes with the territory.

Overall Aladdin is a magical live action creation, that has its fair share of laughs. Brilliant production value along with Will Smith's Genie are at the very heart of what makes this film an enjoyable watch. Plus, the songs are incredible especially the new additions, it's going to take me forever to get them out of my head - I hope this film gets really big so that cinemas put on sing-a-long/dress-up screenings!! Also, there is one scene between Aladdin, Rajah and Jasmine that totally reminded me of that Game of Thrones scene where Jon strokes Drogon whilst Daenerys watches. A great watch that will have you leaving the cinema with a smile on your face.


Please let me know in the comments what you thought of Aladdin.

- Aladdin was on my list of most anticipated movies of 2019 so make sure you check out the other movies  that made the list here: https://thisisjustafilmblog.blogspot.com/2018/12/most-anticipated-movies-of-2019.html