on April 06, 2019
Say my name...Shazam! Is finally out at the cinemas, I feel like I have been waiting ages for this film to be released - anyone else feel the same? Just a quick note I recently wrote an open letter to the DCEU so please give that a read by clicking here! Shazam! is the next film in the DCEU following the success of Aquaman, so a good question to ask is - Is Shazam! any good? Short answer YES! I really enjoyed it and I think you will to. The hilarity of this film really hit me by surprise, there are so many laughs to be had but more surprisingly there are some really touching emotional moments too. So lets get on with the full review. There will be SPOILERS so enter if you dare. 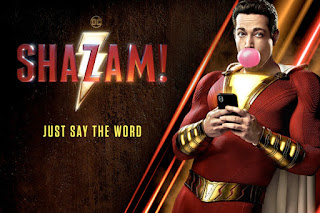 So this film is set at Christmas....Yep you read that right. I don't know about anyone else but I really hate it when a film is set at Christmas but comes out in the Spring or Summer. Anyway the film follows Billy (Asher Angel) a 14 year old foster child with a history of running away to find his mum who he lost at a Christmas fair as a child. Billy after being arrested is taken in by the adorable foster parents Rosa (Marta Milans) and Victor (Cooper Andrews) who already have five other foster children: Mary (Grace Fulton), Freddie (Jack Dylan Grazer), Pedro (Jovan Armad), Eugene (Ian Chen) and Darla (Faithe Herman). Billy fails to make an effort with his new family but does however jump in when he sees Freddie getting attacked by bullies, this act causes Shazam (Djimon Hounsou) to summon Billy. Shazam transfers his wizard powers into Billy, turning Billy into the new Shazam - a 30 year old man (Zachary Levi). We are then shown Billy revealing his powers and his new look to Freddie, who tests him to see what powers he has. No superhero movie would be complete without a villain, The Seven Deadly Sins and their host Dr. Thaddeus Sivana (Mark Strong) forefeel the villain role here. What's really great about this narrative is Billy/Shazam is learning about his powers the whole way through the film, which is a great change because normally superhero's just seem to know what to do. Honestly I liked the narrative a lot, the film makes sure to give the main characters backstories and purposes, plus there are lots of twists which I never saw coming.

The great thing about this film is Zachary Levi's performance. He is so hilarious and so believable. I really felt he managed to act like a 14 year old so well, if he hadn't the film would not have worked at all. Levi also managed to deliver a performance that was relatable, I certainly felt that if I found out I had superpowers I would act in the same way. Also he has come GREAT facial expressions. Shazam! certainly humanises being a Superhero which I love. I also love the relationship that forms between Billy and Freddie and then later the relationship between Billy and his whole foster family. There are also some moments that I found really touching, like when Shazam hands a toy to a scared child and tells her to close her eyes because everything will be okay. This film like Aquaman makes family a central theme which is both grounding and adorable. Also Like Aquaman and Wonder Woman, Shazam! gets his powers from the Old Gods, again this is something I really like and something that makes these films stand together. So what did I not like? Honestly there is a lot to love except the Villain. I found Dr. Thaddeus Sivana a little cheesy at times, I also hated the dramatic way he would take his sunglasses off and he takes them off A LOT!! And even though the film does explain the motivations of the villain I still could not care about him at all which is a shame, but that may have just been me.

Overall I think Shazam! is a really fun film, I went to see this alone, something I never do but I laughed so much I forgot I was on my own. I also think that Shazam! is a mould breaking superhero film full of narrative twists, relatable moments and emotion. It was also great to see the links between the other DCEU films which hopefully means DC might be able to pull together and create a successful Cinematic Universe. I would 100% recommend this film, if you want a great film, that will make you laugh, possibly make you cry, a film that pokes fun at other superhero films (the lair scene) whilst being a serious film that only furthers the world created in pervious DC films then go see Shazam!

Also I now know why they created soooo many of those crazy expensive super suits - that plot twist is AMAZING!

Also also are their any Tangled fans reading? Because at times all I could hear was Flynn Rider! and you should probably go and follow Zachary Levi on Instagram for more laughs - I mean I watched a live video of him go down a ride at the Great Wall of China and loved it! (and I never watch live videos).

Check out my open letter to the DCEU here: https://thisisjustafilmblog.blogspot.com/2019/03/an-open-letter-to-dc-extended-universe.html