on February 10, 2019
Everything is Awesome!!! Or maybe it isn't when it come to The Lego Movie 2. I have just got home from seeing The Lego Movie 2: The Second Part, I was so excited for this film! The first is so original and brilliant which meant the second one had a lot to live up and in my personal opinion it fell short. About 30 minutes into this film I found myself thinking 'how am I even going to write about this' which is not a thought I've had recently the. I thought this is because I really am not a fan of movie bashing/destroying at the end of the day, thousands of people contribute to the creation of a movie and I think it's really unfair when a critic can destroy a film without a second's hesitation. So I am not going to destroy this film because I dont think its necessary so instead read on to see what I liked about The Lego Movie 2 and what I didn't like and why. There will be SPOILERS you have been warned!! 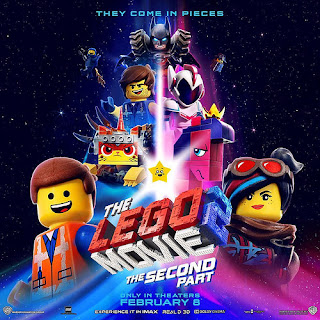 So the movie picks up right where the first one ended, with Duplo invading, after a quick scene where Emmett (Voiced by Chris Pratt) builds a heart and hands it to the Duplo, the Duplo eats the heart and a war breaks out there is a five year time jump. Emmett, Lucy (Voiced by Elizabeth Banks) and Co now live in a dystopian world, where everyone has hardened and grown up except for Emmett. Emmett is still singing 'Everything is Awesome' and has even built a little house for him and Lucy to live in (which is totally cool... where can I get that toaster room). But all is not well and their world is once again invaded this time by General Sweat Mayhem (Voiced by Stephanie Beatriz), she kidnaps Lucy, Batman (Voiced by Will Arnett), Benny (Voiced by Charlie Day), Unikitty (Voiced by Alison Brie) and Metalbeard (Voiced by Nick Offerman) and takes them to her queen Watevra Wa'Nabi (Voiced by Tiffany Haddish) who wants to marry Batman. Emmett sets off to rescue Lucy and the others and the film gets more and more crazy from there. Plot wise The Lego Movie 2 is creative, however it is nowhere near as strong as the pervious film and leaves little impact.

So what did I like about this movie? I loved the constant references to other films, including the mention of infinity war when they almost end on a sad depressing note and they say 'we tried to contact marvel' for help which is hilarious. The use of Lego sets from: Back to the Future, Terminator, Doctor Who and Hot Tub Time Machine. The reference to Harry Potter when someone told Emmett he was a Hufflepuff. There are so many cameos including Dorothy, the Lion, the Tinman and the Scarecrow from The Wizard of Oz. The best cameos are from the DC characters, Wonder Woman (Voiced by Cobie Smulders), Superman (Voiced by Channing Tatum), Aquaman (Voiced by Jason Momoa) and Green Lantern (Voiced by Jonah Hill) who go on a mission to defeat the Duplo which looks like a scene straight out of Justice League. And then there is Batman - who is brilliant, he sings, makes references to every actor that has ever played Batman and honestly now I want to watch The Lego Batman movie again. I liked that the film poked fun a Chris Pratt and his career, they mention several of his films. I also liked the visuals, they used colour really well, contrasting space and the dystopian world. I loved that everything in Space was glittery and girly! I love the new song Titled 'Catchy Song' and I loved the Queen Watevra Wa'Nabi, her sass and her song about not being an evil Queen.

However there was also some elements I didn't like. On a practical level I really didn't think the animation of the Lego was as good as the first film, it just felt more computer generated which was a shame. I also think that this film really was made for children, now I know it's, animated and made for children, but the first film felt so mature whereas this film felt silly a lot of the time. Also there was far to many songs, I get it Everything is Awesome was a hit but that doesn't mean you make the movie into what could be considered a musical. Now I thought this film was hilarious, with its references to other movies and even the president of the USA however the children in the cinema laughed once, so was I just in a quiet screening or do children just not find this film entertaining? As I mentioned above the plot was a real let down, it seemed like it was rushed and any character development from the first film seemed to have been forgotten such as Emmett who had become a super builder was now suddenly useless. Lucy, it turns out has blue and pink hair not black and was the original Everything is Awesome singer - I know it makes no sense. Plus I hated it when out of nowhere Unikitty turned into a giant beast. There was also plot holes such as time travel - I love time travel but honestly it just didn't work in this film.

Overall I didn't come out of the cinema saying wow - which I normally do - I am the first person to get caught up in movie magic but this film just wasn't for me. Which is such a shame. This film will make you laugh but I doubt it will leave a lasting impression. However some of the Lego sets that have been released for the film are AWESOME!! So if you like Lego defiantly check them out, I just wish they had made a giant cake set. Sorry for such a gloomy review.

Please let me know what you think in the comments below!