How to Train Your Dragon: The Hidden World Review

on February 02, 2019
The final instalment of the How To Train Your Dragon trilogy is now out at cinemas. I was so excited for this film, it made my list of Most Anticipated Movies of 2019 (Which you can find here: https://thisisjustafilmblog.blogspot.com/2018/12/most-anticipated-movies-of-2019.html) and let me tell you How To Train Your Dragon: The Hidden World does not disappoint. For the first time DreamWorks has managed to create a series that is brilliant from start to finish. Now I have to confess that when the First How to Train Your Dragon came out I really didn't get the hype and then the second one came out and I really loved it, so I watched the first again and fell in love. What is so great about these films is that they get better and grow with each addition. This film is a great end to the trilogy - I can guarantee it will make you cry. Read out to find out more - there will be some major spoilers!! 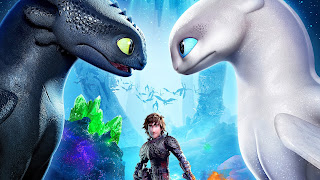 The film opens with Hiccup (Voiced by Jay Baruchel), Toothless and the gang undertaking a stealth mission to rescue some captive dragons, the mission does not quite go to plan and the laughs begin. It becomes obvious that the residents of Berk who were once fearless, trained warriors have forgone training and instead rely heavily on dragons to protect them. Berk is overrun with dragons and Hiccup plans to find the Hidden World where the dragons can live in peace and his people can live without the threat of endless attack. The villain Grimmel (Voiced by F. Murray Abraham), is a famous dragon hunter who wants to capture Toothless and use him as the dragon alpha which would allow him to control every dragon. To do this Grimmel first plans to capture Hiccup and use him as bait, then he uses his light fury to try and capture toothless. Hiccup encouraged by Astrid (Voiced by America Ferrera) goes on a daring mission to save Hiccup, which results in him almost sacrificing his life. Hiccup realises that the Dragons and his people will never be safe, so he sends the Dragons to live in the Hidden World. The film ends with a much older Hiccup visiting Toothless and honestly it will make you cry.

The very heart of this film is its message: that Humans cannot live in harmony with those around them. Hiccup has to hide the dragons and says at the end of the film that only once humans have learned to live in harmony will the dragons be safe to leave the Hidden World. I think this is a very important message to be teaching through film especially a film that millions of children will watch. It teaches that we should respect the other creatures on earth not exploit them for gain and kill them for no reason. What I love about the How to Train Your Dragon movies is their continuous progression and growth, the films start with a town of people that fear and hunt dragons, to town of people who learnt to live in harmony with dragons and end with a town of people that hide their dragons in order to protect them. Hiccup is perhaps one of the most interesting animated characters, he starts as a small, unaccomplished Viking that cannot kill dragons because he is too scared, he then befriends Toothless learning about his species before educating the town, he rescues dragons, and fights with fire, becoming a young Viking chief and then he lets his best friend go because he knows its best for his people and for Toothless. Honestly I found the last 10/15 minutes of this film really hard to watch because I hated that the dragons had to leave and then I hated that Hiccup and Toothless hadn't seen each other for years. There's no way I would have been able to give up my dragon just saying.

How to Train Your Dragon: Hidden World has all the visual flair of the previous films but I actually think that this film is the most visually impressive. The film plays with light and dark and the Hidden World is stunning, the colours are so vibrate and beautiful. It literally has awe inspiring visuals that had me staring at the screen in wonder. I know its an Animated movie but this film would make a stunning live action movie - I can see it all as if it were real. The soundtrack does not disappoint, its beautiful and fun and emotive and blends so well with the narrative, I will be adding some of the tracks straight to my Spotify soundtracks playlist.

Go see this film, even if you wait till it comes out on DVD! If you are a fan of the previous films then Hidden World is an essential watch and if you haven't watched any of the How to Train Your Dragon films then go watch them!! This film is adorable and funny and I LOVE the new light fury like if I was a dragon I would want the sparkly skin. I dare you to name a cuter friendship than that of Hiccup and Toothless.

On a side note, you know how Hiccup grew up between the first and second films and everyone went crazy? Well he ages again at then end of this film and oh my..... Just saying.

Also Build a Bear are now Selling Toothless Bears so if anyone wants to get me one.

Thank You for reading x