on January 02, 2019
This week I have decided to write about something a little bit different and that is my local cinema. The cinema in my town is the New Century Cinema Sittingbourne. Back in December  I went to the cinema website to see what times it was screening Aquaman when I noticed at the very bottom of the page there was a Christmas message and in that message it was mentioned that in any other town the building that the cinema resides in would be a listed building. This really got to me, I have always had what you would call a soft spot for Sittingbourne cinema, it has the potential to be something really amazing. I have always had visions of it being renovated until the project 'The Spirit of Sittingbourne' was made public, the plans  which included the build of a multiplex cinema - my hopes that one day Sittingbourne Cinema would get the attention it deserves were dashed. I have done a little  research and the image below shows how the cinema looked in 1937: 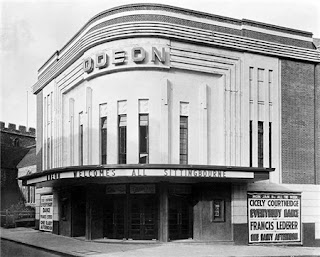 Sittingbourne cinema opened as an Odeon on the 4th January 1937, that makes the cinema 83 years old. When it was opened it had 1,593 seats and had a theatre layout with Stall and circle seating. The cinema survived a World War before being sold in 1967, and in 1968 was closed and converted into a bingo hall. In 1971 a 111 seat screen opened and an 300 seat screen opened the following year, with the bingo hall still in use on the lower level. In the years after the building and the cinema changed ownership several times. Then in 2006 the smaller screen closed and in 2009 the whole cinema closed completely. The cinema reopened in 2015 first with one screen and then with a tiny second screen and it remains open now. Cinema tickets are £4 a movie which is great value for money and it is clear that renovations such as new screens and audio have been added but the building needs a complete makeover back to its Art Deco roots. The image above shows how great it could look.

Sadly it does not seem that a makeover will ever happen, soon Sittingbourne will be opening a brand-new custom built multi-screen cinema and I find the whole situation rather sad. I know there is much to be said of letting go of the past and moving forward but must we forget history? The current Sittingbourne cinema has so much potential if only the council or someone had taken the time to invest and restore it to its former glory, yes it may have only room for two screens but if you were to remove the bingo hall it has the potential for more. Plus screen one is larger than most cinema screens, it had a stage at one point and curtains (Which I find pretty cool). The Buildings Art-Deco design adds ambience that is reminiscent of old Hollywood and the golden days of cinema. Yes its old fashioned but do we really need another run of the mill cinema that you can find in practically every town and city all over the country?

Recently I have been asking people about their memories of Sittingbourne cinema and everyone no matter their age has stories and memories and that is another unique selling point this building has - it has stood as a cinema for 83 years! I have serval memories: I remember watching Monsters Inc with my family, I watched Harry Potter and the Philosophers stone there for the very first time - this cinema literally introduced me to the film series that would later inspire me to get into film. I remember going to one of the last screenings before it closed in 2009. And since it opened in 2015 I have been there countless times because its local, it has a huge screen and I think its so important to support something local.

It is such a shame that this cinemas history may soon be at an end, when it has such potential to be amazing. It makes me so sad to see what was once a great and beautiful place left to go to ruin. But I will continue to go and watch movies at the original Sittingbourne cinema until it finally closes its doors.

Please let me know what you think in the comments - I would love to know your thoughts.

Thank you so much for reading I know this has been different to my usual posts.