on December 21, 2018
So the pre-Christmas films are out at the cinema now, and whilst most people excitedly waited for Mary Poppins Returns I waited for Aquaman. If I am honest I have never been a Mary Poppins fan and let's face it all of the Aquaman trailers especially the extended one just looked so cool. So I went to see Mary Poppins Returns...… Just kidding hahahaha! I saw Aquaman and I was very glad I did. Before I go into any detail can I just say that Jason Momoa was literally awesome for the whole movie which I am totally unsurprised by. What is very clear is DC has ensured that Aquaman is no longer a joke. Okay so this review will contain spoilers - not many I promise but you have been warned. 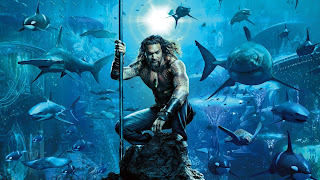 We were all expecting visual flare from director James Wan and we certainly got it. Aquaman is visually stunning. The majority of the film takes place under the sea in various cities including Atlantis, I expected these scenes to be dark and the cities to be old fashioned which is something we see time and time again in film. But the under the sea scenes in this film are full of colour, brightness and modern structures that all work together to create a beautiful visual it would be so fun to pause this film and get a closer look at the details. The on land scenes are not a disappointment either, the scenes in the Sahara desert, Sicily in Italy and in Maine also play with colour and brightness. Each scene is so packed full with mise-en-scene and action which makes this film a really interesting watch. The film at times also experiments with shots, playing with depth and perception which was nice, I would have liked a little more of this actually.

Plot wise there was lots of rumours and reviews etc that the plot was somewhat lacking, I really disagree! Aquaman is a compelling adventure movie that just happens to have a superhero as its lead. Aquaman is different to the usual superhero narrative we have become accustomed to, which is  a good thing. The narrative is strong, Aquaman/Arthur (Jason Momoa) must challenge his brother Orm (Patrick Wilson) to become king of the sea in order to stop a disastrous war between Land and Sea. Along the way Arthur with the help of the awesome Mera (Amber Heard) must find the Trident of Atlan which has been missing for centuries. But what is at the very heart of this narrative is Love and family which is what is so great about the film in general. As Arthur explains everything in the film was possible because the Queen of Atlanta/his mother (Nichol Kidman) fell in love with a Lighthouse keeper/his father (Temuera Morrison). The film almost repeats itself because Atlenna runs away because of an arranged marriage and as a result falls in love with a human and Mera years later has been arranged to marry Orm but she instead finds love with Arthur. The film begins with Aquamans' parents and ends with them. In any other narrative Aquamans' love for his mother and father and later Mera would be seen as a weakness but in this film it's his love and his drive to protect people that gives him power and that's amazing.

The cast of Aquaman give brilliant performances: Jason Momoa especially. I think he is perfect for the role and he brings Aquaman to life in a totally unique way, he is strong and powerful, funny and great with emotion. I am a huge fan of Momoa anyway but this film makes me like him more and more as an actor (He seems pretty cool on insta as well tbh). I really loved both Amber Heard's performance of Mera and Nicole Kidman's performance as Atlanna, both actresses play amazing female characters that are great at combat and showing emotion. What I love about the DC films are the female characters, they are just as good as their male team members if not better and they don't have to explain why they are as powerful as they are, they just are. As a woman that loves superhero movies I find this so amazing and it makes me so so happy. I also love that Mera can control water and red wine apparently (such a cool scene). I did find Patrick Wilsons performance a little dramatic but not distracting. Willem Dafoe was also great as Nuidis Vulko.

So did I love Aquaman: Oh Yeah. Honestly go and watch this movie, it's great fun, I totally laughed a lot and its narrative is charming. Great direction, cast and visuals. A film that comes at a time of great uncertainty for the DC extended universe, which is sad because I really think they are heading in the right direction. I really do hope we get to see a lot more of Jason Momoa's Aquaman. (Ps - who else loved the little moment where he battled on a seahorse?).

Thank you so much for reading x

Leave your thoughts down in the comments (You don't have to be a google member to do so). 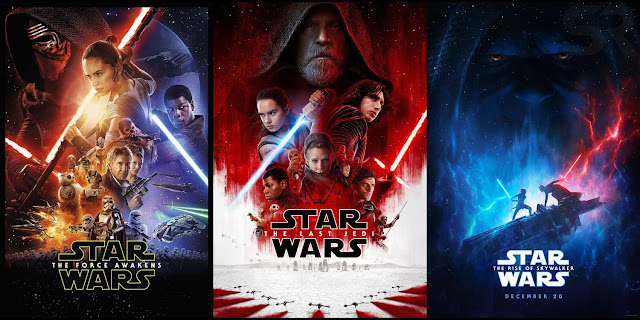 It's time for my next rewrite and this time I have decided to re-imagine the Star Wars Sequel trilogy. Last time I rewrote Shrek 3 and 4  - check it out HERE . I really enjoyed sharing my ideas, so I thought I would give it another go. I feel incredibly brave sharing my Star Wars rewrite because the Star Wars fan base can be very opinionated so I fully understand that my rewrites will not be to everyone's taste. But I really hope you like my changes. I will be making a few minor changes to S tar Wars: The Force Awakens and then some major changes to Star Wars: The Last Jedi and minor changes to Star Wars: The Rise of Skywalker . I should quickly point out that I actually really loved the sequel trilogy overall, so - this post is just going to focus on changes I would make rather than be a negative Star Wars bashing post, anything I do not mention or change will stay the same. So, let's get to it: Check out my May the fourth post by CLICKING HERE Buy the Skywa