I Went to Disneyland!

on August 10, 2018
So last weekend I visited Disneyland Paris! Now you may be thinking 'what is the point of this post' well the answer to that question is - Disney is currently one of the most powerful production companies in the world, it has a huge history and I was inspired to write this post whilst being swept up in the Disney park magic. As its the last summer for the parks 25th anniversary there was a new parade which featured serval stunning floats, all the favourite characters and an incredible moving and smoking dragon! Recently the news hit that Disney would be taking over Fox - meaning it finally owns the rights to the rest of the Marvel characters such as X-Men and Fantastic 4 and with the rumour that these characters will begin to be incorporated by the end of this financial year I'm betting Avengers 4 will have a cameo or two. Read on to see what I thought of Disneyland. 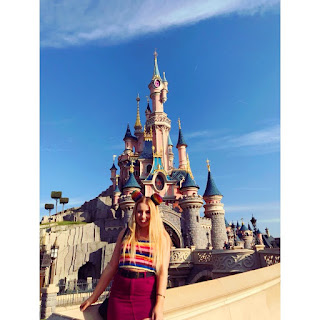 So I haven't been to Disneyland in years and this summer seemed like the perfect time for a trip. It is honestly the most magical place on earth and I want to go back so bad already. My favourite three rides were The Pirates of the Caribbean ride - A water ride that takes you into a pirate world, The Ratatouille ride - A 3D magnetic ride that reduces you to the size of a rat and Star Tours - A 3D simulation ride that takes you on a Star Wars mission. My favourite area of the park is either Fantasyland or Pirates Beach - both of which are incredibly designed and visually spectacular, plus being on pirates beach literally transports you to the world of the pirates films (they even play the soundtrack). As I said I haven't been in forever so I was really interested to see how Star Wars and Marvel had been incorporated into the parks and the magic.

I'll start with Star Wars, Star Wars has really started to make itself known in the parks, Space Mountain is now Star Wars Hyperspace mountain for example. My favourite Star Wars addition is the simulation, 3D ride - Star Tours, I went on this twice and I would have gone back again if I'd had more time. The ride transports you into the Star Wars universe, where you fly through the stars, traveling from a space station to a different planet each time. The biggest Star Wars delight was during the night time illuminations, where the castle lights up with projections, fireworks, water displays and even fire... yes fire, taking you into multiple Disney movies. The addition of Star Wars to the night time fireworks was incredible and actually gave me Goosebumps. Star Wars is officially part of the Disney magic.

Now onto Marvel, honestly I was a little disappointed by the incorporation of Marvel at the Disney parks. The Avengers did not feature in a parade or illimitations like Star Wars did and the only evidence that marvel is part of Disney was in the gift shops and in the Studios park. There were however huge statues of Iron Man, Hulk and Black Panther which I loved and a few shows with the characters - which I sadly did not have time to see. But the only thing I thought was really great about the marvel addition was the themed food! I had Groot shaped bread and Avengers inspired cupcakes both of which were amazing. 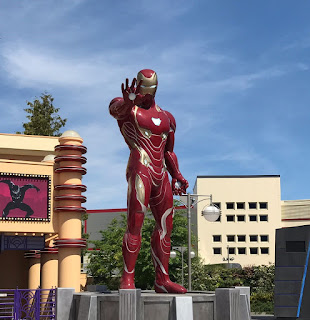 I cannot wait for the expansion that is going to take place in the Studios park in the next few years, where a Star Wars world is planned, several rides in the park will be rebranded - such as the Rockin roller coaster with be Iron Man themed and the Hollywood Tower of Terror will become Guardians of the Galaxy themed (also the New York hotel is getting an Avengers makeover). They will also be adding a Frozen world which will be incredible I am sure. One part of the studio park I love is the Tram tour that goes behind the magic to show how things are filmed/a show of special effects - I think it needs a huge update as its exactly the same as it was when I went over 10 years ago so I think it would be great if it was updated with a Marvel scene, showing some of the effects used in the movies.

Overall Disney really is the most magical place on earth, the park was as stunning as I remember as a child and the rides are great. I also loved the combination of Disney princess, Star Wars, Pirates (The pirates of the Caribbean section of the Illuminations was my favourite). Once the parks have had its little makeover/expansion I will be sure to go back. 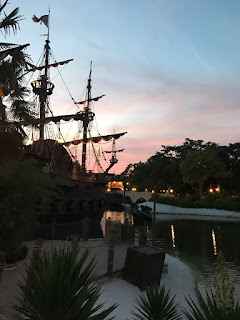 I am think of doing a future post about who I'd cast to play the X-Men etc... in future Marvel movies - so let me know if this is something you'd be interested in.

As always thank you for reading.