on August 19, 2018
Yesterday I saw Christopher Robin, not to be confused with last years Goodbye Christopher Robin. As a long time Winnie the Pooh fan I was excited to see that Pooh and his friends were being made into a live action movie, where they are were 'alive' instead of just stuffed animals. Obviously this film is not the first live action Pooh film but it is original - of course it references the original A. A. Milne story's but the narrative itself is a new take on the stories we all grew up reading. The film is surprising moving and you should expect to leave the cinema having shed a few tears, laughed a lot and full of a warm fuzzy feeling. Read on to find out exactly what I think however there will be spoilers. 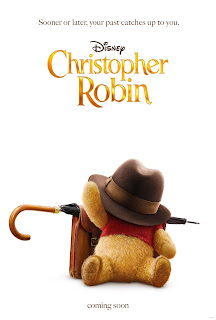 The film starts with the inhabitants of the Hundred Acre Wood (This is the place Pooh lives if you didn't already know...) planning for Christopher Robins farewell. Young Robin (Orton O'Brian) is off to boarding school and will be leaving his country home where the doorway to the Hundred Acre Wood is and therefore he must leave his friends behind for what he believes is forever, we see him leave then struggle to fit in at school and then time moves forward. In a beautiful and moving montage sequence we are shown Christopher Robin (Ewan McGregor) now an adult meet and marry Evelyn (Hayley Atwell), have a daughter Madeline (Bronte Carmichael), Fight in Wold War Two and return to work as a head of department at a luggage company. Robin has lost all sense of fun, even making his daughter study instead of play. Pooh however after losing his friends travels to London where the adventure begins and he attempts to reawaken Robin.

Ewan McGregor is perfect in this film, his character's development is believable at all times. He really impressed me, he is at the very centre of this film and I found his character very easy to connect with. Hayley Atwell a long time favourite actress of mine is also wonderful, the moment when she realises that Pooh and Co are alive is one of the best scenes in the film. Villain of the narrative Giles Winslow Jr. (Mark Gatiss) is pompous and cocky, yet he is a stereotypical PG rated film villain -silly. The only character I found it difficult to connect with or even like was Madeline Robin, her lines at time felt forced and her acting wasn't as polished at her co-stars which is understandable. But I feel that her character could have been improved greatly if her lines where perhaps more childlike and less forced.

But the real stars of the movie are of course Winnie the Pooh, Tigger, Eeyore and Piglet. Winnie the Pooh (Voiced by Jim Cummings - who voiced Pooh in the 1997 movie that I grew up watching) is adorable. In one scene he asks for a Balloon and its honestly the sweetest part of the film and his obsession with the Balloon making him happy is beyond cute. Tigger (also voiced by Jim Cummings) is the usual hyper-active character we all love, I have a Disney CD that has the Tigger song on and so when he sings it in the film I was ready to get up and join in, it honestly made me so happy. And who couldn't love Eeyore (Voiced by Brad Garrett) who was also a childhood favourite, he just so gloomy and adorable that every scene he is in I just wanted to pick him up and cuddle him. Although I am not a massive fan of Piglet (voiced by Nick Mohammed) his relationship with Pooh in the film is second only to the relationship that Pooh and Robin share which is again adorable.

One thing that surprised me about this film was how beautifully it was shot. I did not expect there to be so many magical scenes of nature, of light falling through the trees, the wind blowing flowers - it is truly dreamy at times. The film also manages to be eerie as well, in one scene Pooh stands in the wood surrounded by fog holding his red balloon and all I could think of was IT. The way the film captures World War Two is also very tasteful and artfully shot, which is stunning to watch. Visually this film is wonderful and if you are into beautiful shots then you must go to see this film. Whilst I am talking about visuals I should mention CGI, the characters such as Pooh and Co are beautifully animated, the detail is incredible and part of the reason this film is so impressive. However there is one scene that I felt the CGI could have been better - when Madeline is trying to catch papers that are flying away in the wind she kneels on the ground trying to catch them for a long time yet the clearly CGI papers have flown well out of reach almost instantly.

Overall I really enjoyed Christopher Robin and think that it does the Winnie the Pooh stories justice. My favourite scene is probably the scene where Pooh wakes up, does his morning stretch route and then discovers that the honey is all gone - a scene that I remember from an aminated film I watched as a child. If you love or even like Winnie the Pooh then make sure you go and watch this film, because I guarantee you will enjoy it.

And a quick shout out to my friend Dan who worked on this film!!! How cool is that everyone?

Just a note that posts may be a little frequent for a short time as I got a new Job!! But I am still dedicated to this blog and writing for you all.

I am thinking about having a little blog makeover again so any suggestions that you think would improve your experience then leave a comment below.