on June 26, 2018
This weeks review is Oceans 8!! Just a quick note before we get into the film: make sure you follow me on Facebook (Just click the link on the right hand side of the home page) also to celebrate hitting 9,000 reads last week I want to find out want my readers want me to post next - This can be a review of a film (new or old) a comparison anything film based really so please just send me a message or comment on this post. So on to Oceans 8. This film was on my list of most anticipated films of 2018 (Click here to see what else made the list) and I have been looking forward to its release since the first trailer dropped. I think that Oceans 8 is a great addition to the Ocean franchise that's worthy  watching - it is not some knock off of the originals.Spoilers. 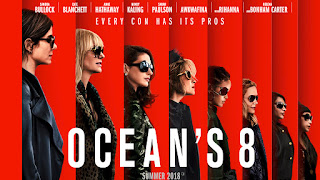 Before I get into the plot, I should mention I am not a huge fan of the female remake trend that has hit Hollywood in recent years, I think that instead of remaking 1980's movies badly (I'm looking at you Ghostbusters) that more strong, interesting and main characters should be written for women. So when I heard that an all female Oceans film was in the works I feared that it was just going to be a remake where the male characters were replaced by females. However what is so great about Oceans 8 is that it is a continuation of the pervious Ocean movies, the characters and story are original. The films main character is the sister of Danny Ocean (George Clooney) - Debbie Ocean (Sandra Bullock), we find out that Danny has infact died before the events of the film. Debbie finds herself in prison after her Ex ratted her out to the police. After her realse she puts together a team that is made up of: Her partner in crime Lou (Cate Blanchett), Jewellery maker Amita (Mindy Kaling), Rose (Helena Bonham-Carter) a has been fashion designer, Constance (Awkwafina) who makes money as a pickpocket and street performer, Nine Ball (Rihanna) a hacker and Tammy (Sarah Paulson) a mother that claims to have retired from criminal life whilst selling stolen goods. The group team up to carry out Debbie's heist job that she planned whilst in prison. The heist which is to steel a diamond neckless takes place at the Met Gala. I have seen a few complaints that the narrative is very similar to its predecessors  and I will admit it is but there are certain and pretty good twists that make this film an exciting watch.

The acting thought-out this film is believable, each actress brings something to the film and I would expect nothing less from a cast of this Calabar. It is great to see Helena Bonham-Cater in this type of role, it really highlights her versatility (she can literally play any part), Sandra Bullock is faultless (again I wouldn't expect anything else), Anna Hathaway's performance was also a stand out for me. Hathaway plays the unwitting mule in Debbie's plan. Hathaway's character Daphne Kluger is funny and a little dizzy and the narrative twist that involves her is great.  There is a great deal of cameos throughout the film including celebrities such as Kim Kardashian as well as models such as Gigi Hadid. There are also appearances by characters from the pervious films: Elliot Gould reprises his role as Reuben Tishkoff and Shaodo Qin once again plays "The Amazing" Yen. It was great to see these characters and I think its a shame more of the original actors did not feature especially when both Matt Damon and Carl Reiner both filmed scenes that never made it into the final film.

What I did enjoy about this film was the references it made to having an all female lead. For example when Lou suggests they recruit a man, Debbie responds by saying that she didn't want a man because men get noticed and they need to be invisible. This line did make me laugh, many women face the struggle of being invisible so I am glad the film made a point of this. Also it is just great as a woman to see such strong characters, this film and others like it (Such as Wonder Woman) give me hope for future and for women in film.

Overall Oceans 8 is a very enjoyable watch, yes the narrative is slightly worn but the film adds twists and the characters are diverse and interesting. If you like the pervious Oceans movies/ Heist movies then Oceans 8 is the film for you. Personally I thought it was great to see so many female leads in this type of genre. Also this film is worth a watch for the score alone, I just loved it.

Sorry for the shorter review this week.

As always thank you for reading, I am always grateful x