on June 11, 2018
Today I saw the next instalment to the Jurassic timeline: Jurassic World: Fallen Kingdom. This film is a nail biting thrill ride that will have you sitting on the edge of your seat. I cannot tell you the amount of times I brought my hands up to my mouth or to cover my eyes. I felt engaged from start to finish, the film resulted in laughter, shock and tears. Make sure you stay until the end of the credits...  Just a quick warning: This post will have spoilers. So lets get into it!! 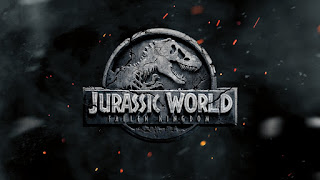 The film picks up a few years after the events of Jurassic World, which ended with the collapse of the theme park and evacuation of humans, leaving the island of Isla Nublar ruled by dinosaurs. Jurassic World: Fallen Kingdom begins with a tense scene on the island as a team attempt to retrieve the DNA of the Indominus Rex (the dinosaur that resulted in the evacuation of the island in the previous film). The exposition sets the tone of the movie, as the large water dinosaur (Mosasaurus) claims three victims within the first couple of minutes. It is then revealed that the once dormant volcano on this island is once again active and that there is an argument happening as to whether the dinosaurs should be saved. Arguing that they should not be rescued is Jurassic legend Dr. Ian Malcolm (Jeff Goldblum) - I will get into his reasoning in a little bit. It is also revealed that ex park runner Claire Dearing (Bryce Dallas Howard) is working as part of a group that wants to save the animals. She joins with a team, roping in Owen Grady (Chris Pratt) that journey to the island on a supposed mission to save as many dinosaurs as possible and transfer them to a sanctuary island. All is not what it seems however and the dinos are captured, mistreated and transported to America to be auctioned off as weapons. This results in the creation of a new dino (because apparently the Indominus Rex was not scary enough) and a incomprehensible resolution.

So I've seen a few negative comments on the narrative of this film, stating that it adds nothing to the timeline etc. I however really enjoyed the story progression in this film and I felt that the events of this film opened up the Jurassic universe, expanding it from 'dinosaurs cause havoc on one/two rather isolated islands to dinosaurs in America, in our oceans, dinosaurs everywhere!' I will admit I did guess one of the major plot points quickly - that Masie (Isabella Sermon) is in fact a clone, so maybe that was obvious (Let me know if you guessed it too). But personally I enjoyed the films storyline, there was not one villain but many and they all met their own snappy death. The film created suspense: dinosaurs creeping around library's, creeping out of trees etc... It also takes place over a short space of time, and mainly in one location which I think is very clever. I should mention that I did find the start of the film (after the first scene) a little slow. But for me a good narrative is engaging and I was engaged throughout this film.

I will just quickly mention characters. It was great to see the development of leads Claire and Owen, Claire used to running operations once again is  running an operation this time: dinosaur rescue and Owen is building himself a house in the middle of nowhere. As the film progresses they grow close again. We are also introduced to a variety of new characters including no nonsense paleoveterinarian Dr. Zia Rodriguez (Daniella Pineda) who is a great addition to the franchise and I do hope we see her in the next film, the next new addition is systems analyst Franklin Webb (Justice Smith) who screams his way through the film - to be honest I would defiantly be him. Another new character is Masie Lockwood the clone granddaughter of Mr. Lockwood (the former business partner of John Hammond), she is a great young actress that showed believable emotions. This character is a central part of Jurassic World: Fallen Kingdom's narrative and message and I am sure we will see her again in the next film as the film ends with her traveling with Claire and Owen. As I am mentioning characters, the connection this film creates between the dinos (Such as the T-Rex and Blue) and the audience is incredible, I rooted for some and hated others, I cried for them and some of them terrified me. This film certainly anthropomorphises the dinosaurs to create this connection, this humanisation is most obvious in Blue, as the film plays upon the relationship between Blue and Owen, we also see Blue shed a tear. I did however miss Zach (Nick Robinson) and Gray (Ty Simpkins) from the pervious instalment.

This film raises many questions, regarding animal welfare, the medalling with natural order, the destructive nature of humans and the world with free roaming dinosaurs. Jeff Goldblum's role though short is essential to the films message, he highlights that by bringing dinosaurs back humans messed with natural order, bad guy Eli Mills (Rafe Spall) also argues this yet unlike Goldblum who wants the extinction of dinos, Mills uses this argument to exploit the dinos by selling them as weapons. Which raises the issue of animal welfare, the way the dinosaurs are treated as they are taken off the island is disgusting and the fact that the government had ruled that no action would be taken to rescue these living beings was awful. The issue is punctuated in one scene where you see a harmless dinosaur covered in red smoke and crying out as it dies - this scene made me cry so much. The argument comes to a point at the resolution of the movie when Masie releases the dinosaurs into the wild stating that 'they are as alive as I am' and honestly I watched that scene feeling that I would have done the same. Masie herself is a clone which raises the issue of cloning and bringing someone back from the dead. This film makes you think and I think the messages it raises are ever relevant in todays society.

Overall this film is a thrilling sequel, that will grip you from start to finish. The acting is believable,  the characters refreshing and the narrative raises important questions. I would say that I wasn't really a fan of the score at points, some parts are perfect and others distracted me from the action on screen. I think that this film is certainly worth a watch, it is a great adventure and pure entrainment even if it is a little scary at times. The hype surrounding this film has been great, from the endless string of premieres to the life sized dinos, but Chris Pratts Instagram story is brilliant, he honestly is hilarious. If you want to see him playing with the Lego figures of himself and Blue then make sure you check out his insta story.  Go see this film!!

On a different note BBC news features in the film I would love to know whether different news stations are shown in different counties so please let me know!!

Thank you for reading