on May 25, 2018
Once again we should put on our Star Wars t-shirts and head to the cinema to watch the most recent instalment of the ever expanding universe: Solo: A Star Wars Story! This film was one of my most anticipated movies of 2018 (To check out that list click here), however after watching the second trailer I found myself thinking - I've got a bad feeling about this(Did you see what I did there). However I could not have been more wrong, Solo is a great ride, full of well developed characters, a great narrative and stunning visuals. I honestly gasped several times whilst watching - it is that good. This film almost makes me forget about the middle section of The Last Jedi...almost. I should mention this post will contain spoilers. 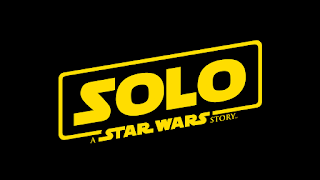 Okay so a quick narrative run down. The film opens with a young Han (Alden Ehrenreich) stealing a hover car on the not seen before planet of Corellia. Corellia is under the control of the empire and rife with criminal activity. Han quickly double crosses the alien group he works for and escapes the dismal planet. The only way he can escape is by signing up to become a pilot for the empire. His escape comes with a huge sacrifice, he has to leave behind the woman he loves Qi're (Emilia Clark). But he promises to train as a pilot, buy a ship and come back for her. Fast forward 3 years and the film cuts to Han now a ground troop fighting in a rather grim battle. We quickly learn that he was kicked out of flight school for not being able to follow orders, something Han struggles with thoughout the film. In this battle he meets smuggler Tobias Beckett (Woody Harrelson) and his team, who work for the crime organisation the Crimson Dawn which is 'run' by Dryden Vos (Paul Bettany) a sadistic figure that takes pleasure in controlling others. The second Han joins Beckett he becomes part of two elaborate heists to smuggle the hyperfuel Coaxium. The film is full of twists, turns and betrayals, whilst exploring the beginnings of the relationships between Han and Chewy (Joonas Suotamo) and Han and Lando Calrissian (Donald Glover). I was honestly hooked the entire time, the narrative had perfect timing throughout.

Now I was not sure about a Han Solo movie without Harrison Ford but at the same time I was routing for Alden Ehrenreich. I have been a fan of his since his role in Beautiful Creatures, although he is not exactly well known I thought he would be the perfect fit for the role and I was right. He manages to pull it off, within the first 10 minutes I was convinced I watching a film about Han Solo and I forgot that I was upset about Ford not being in a movie about a character he brought to life. As we are talking about characterisation it would be wrong not to mention Emilia Clarkes Qi're. She is incredible if I am honest I expected nothing less from the mother of dragons and Star Wars which have given us so many great female characters (Leia, Padme, Rey and Jyn).  In her final few scenes, she not only takes out the bad guy that has held her captive, she also takes over his role as head of Crimson Dawn, and betrays Han who is very clearly in love with her. She is such a great character that I want to see her in another Star Wars movie. Donald Glovers Lando is also great, Lando has always been a character that intrigued me, so I enjoyed learning more about him and his collection of capes. He was certainly full of himself in a charming way that really added to the narrative.

Solo answered many questions that we had surrounding Han whilst answering questions we didn't even know we had. I personally was always intrigued about the dynamic between Han and Chewy - how did they meet? why do they stay together? Solo answers these questions, we see why chewy owes his life to Han, we see that Han is the one to give Chewbacca the nickname Chewy. We finally get to see the famous Kessel run - which is pretty cool! The second the planet Kessel is mentioned you could hear the whisper of 'the Kessel run' ring though the cinema. We also found out how Han got the surname Solo - something I never really wanted to know but nonetheless it added to the narrative in a way that made perfect sense. Also I am always saying we need more references to the prequels (because I actually like them alot) and one question from the prequels was answered in a shocking moment when none other than Darth Mual is revealed to be the true leader of the Crimson Tide. We even get to see that fabulous two sided lightsaber!!!!

Even for a Star Wars movie Solo is visually stunning. It may be the most striking of the entire franchise. From shots of the Millennium Falcon flying through space, where the contrast of the Blue light of the ship and the blackness of space creates a picture perfect scene. The battle sequence when Han is a ground troop is ghastly but full of images that blow me away, the combination of smoke, gunfire and lights from aircrafts is what makes this scene so different to anything we have seen in a Star Wars film before. One scene that I have been unable to get out of my head is when a star destroyer appears in the tunnels of  lightening smoke surrounding Kessel. This visual is just so menacing and powerful.

Overall Director Ron Howard has given us a brilliant addition to the Star Wars universe. I find myself wanting a sequel, I want more Darth Mual, more Qi're, more Lando and more Han, plus the ending hinted at a sequel as Han and Chewy are off to Tatooine. I think this film is definitely worth a watch, it is the film that we never really needed but now could not do without. All I want now is a Obi-Wan Kenobi film with Ewan McGregor.

Let me know what you thought of the film.

Thank you for reading
Until next time May the Force be With you .