on April 01, 2018
Ready...Set...Play! Ready Player One is set in 2045, Earth is over populated, technology has taken over and people spend the majority of their time in an alternate reality: The Oasis. Based on the 2011 book of the same name by Ernest Cline, Hollywood heavy weight Steven Spielberg brings the future and the Oasis to life. I have to admit I expected great things from this film, the trailer looked incredible, the first reviews stated it was Spielberg's best work and it is full of 80s references (I am a huge fan of the 80s, the fashion, the music and especially the movies) however I felt a little disappointed when I left the cinema. That's not to say I didn't enjoy the film because I did. 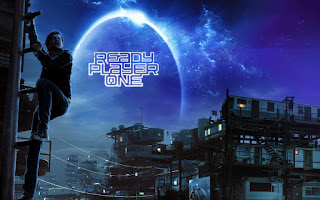 Ready Player One follows Wade Watts/Parzival (Tye Sheridan) as he and his friends, Helen Harris/Aech (Lena Waithe), Samantha Cook/Art3mis (Olivia Cook), Toshiro Yoshiaki/Daito (Win Morisaki) and Akihide Karatsu/Sho ( Philip Zhao) try to complete the challenge that was left in the Oasis by its creator James Halliday/Anorak (Mark Rylance) before his death. The group named 'High Five' are up against villain Nolan Sorrento (Ben Mendelsohn) CEO of IOI  who is seeking to take full control of the Oasis. Each character adds something to the narrative, all have depth and personality which adds to the films appeal. However I did think that at times there was a lack of emotion. There was one character: F'Nale Zandor (Hannah John-Kamen) who is an agent of IOI that is tasked with hunting down Wade Watts and his friends in the real world in order to stop them from taking control of the Oasis. I felt her character lacked development she was cheesy and if I'm honest she would have been more suited to the Spy Kids franchise. The narrative itself was original and enjoyable, it comments on society and technology which is an increasingly relevant topic. However I found myself wanting more. I also felt that there was a times pacing issues, in the final battle it would have been great to have the film cut from the Oasis to the real world more frequently to build tension and when Watts completes the first task the film feels rather flat. Moreover I felt that the final scene was disappointing and again flat which is a shame considering the lead up to it is rather impressive.

One moment I was blown away by was the first time we entered the Oasis. We are taken from the ordinary world and transported like the characters in the film to a place that is truly awesome. The camera movement draws your eye to different parts of the screen, giving you the urge to move your head. The movement achieved in this scene is impressive. The colours are vivid, the music is cool, the places shown are varied (Minecraft land, a snowy mountain, a beach). It is like every video game that you've ever played all in one place. The Oasis is brilliant, the animation is detailed which creates a sense of realism, if given the chance I would want to go there. The film overall is a visual funfair. But it is not just the visuals that make this film so cool, the music is great as well. It uses a combination of orchestral score and 80s hits that help to immerse you in the oasis.

Throughout the film there are constant references to other films, you would have to watch the film frame by frame to see every one of them. Most of these are 80s references such as: the DeLorean from Back to the Future, teenage mutant ninja turtles, Beetlejuice, King Kong, Alien, the T-rex from Jurassic Park, the 80s Batmoblie, Gundam, Godzilla, Star Wars (we get a lightsaber and a few mentions - after all it is not a Disney film) - all of which can be seen throughout the film. Films such as Ferris Bueller's Day Off and The Breakfast Club are mentioned. There are references to games such as Halo, Minecraft and Overwatch. There are also mentions of Michael Jackson and Prince. The Iron Giant has a large role during the final battle this made me incredibly happy as I was a huge fan of The Iron Giant film as a child. However what was missing was the references to Spielberg's own films, references to his films are made throughout the book so it was disappointing to see that they had been left out of the film. Considering Spielberg's films from the 80s were a central part of pop culture, it would be interesting to find out why he did not pay homage to his own work.


There is one moment I really did not like, the second task is based within Stanley Kubrick's The Shinning. I try to avoid horror films at all costs, I scare rather easily so horror films are not my thing. So going into this film I did not expect to be met by a Horror sequence. I have never seen The Shinning but I know what happens and have seen parts of the documentary Room 237 which explores the film. Considering Ready Player One is a Science Fiction film I did not expect to spend 10 minutes of the film not watching the screen. Moreover the film is rated 12a which means children under 12 are able to watch the film, I personally think there should have been a warning somewhere saying that there is a scene that plays homage to The Shinning. Furthermore this scene is a change from the book, I think there are countless films that could have been used here.


The concept of the film is something brilliant and I take my hat off to Cline for creating the narrative. I have added the book to my reading list and cannot wait to read it soon. If you have read any of my other posts I am sure you will notice that I quite often disagree with most critics and I certainly do in regards to Ready Player One, I think it was an okay film, with a great premise, that at times failed to hit the mark. I am not a huge fan of Speilberg but I certainly think that he has made films that are better or on par with Ready Player One. Overall I would say that the film is worth a watch, I will be buying it when it comes out on DVD.

Thank you for reading.
Please let me know what you think and check out my other posts.