on February 13, 2018
I know I am a little late to the party considering this film came out here in October 2017, but last night I finally went to see Loving Vincent. Loving Vincent revolves around the life and most importantly the death of artist Vincent Van Gogh. What is really remarkable about this film is that is entirely hand pained, all 65,000 frames of the film where crafted by a team of oil painters. Inspiration for the film evidently evolved from Vincent's paintings and his written letters. The film is Directed by Dorota Kobiela and Hugh Welchman and was funded in part by the Polish Film Institute and a Kickstarter campaign. Staring: Douglas Booth, Chris O'Dowd,  Saoirse Ronan, Helen McCrory, Aiden Turner, Jerome Flynn and Eleanor Tomlinson. 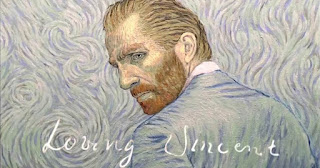 Loving Vincent is the perfect example of one art form paying homage to other. It shows what can be created when painting is combined with cinema and the result is something that is visually unlike anything you will ever see. The acting is remarkable throughout and the painters did a fantastic job of capturing facial expressions and movements. Moreover the film constantly utilises Vincent Van Gogh's art works to form a narrative, that will have you constantly thinking 'I've seen that before'. The characters themselves are created from portraits Vincent painted.

The film takes place a year after Vincent's death. The main character of the film is Armand Roulin (Douglas Booth) who is tasked with delivering a letter written by Vincent (Robert Gulaczyk) to his brother Theo Van Goth. Armand discovers that Theo had died six weeks after Vincent's death, meaning he is unable to deliver the letter to its intended recipient. Armand's father Postman Joseph Roulin (Chris O'Dowd) has a growing suspicion that Vincent's suicide is not all it seems so Armand sets out to deliver the letter to Theo's Widow whilst attempting to uncover the truth of Vincent's death.

The film has a story like narrative, that jumps from the present to the past as characters recount their stories. The present is shown in colour and the past is shown in black and white, creating the illusion of entering a story book. Flashbacks are an effective method of storytelling that are often overused in cinema, however due to the investigative nature of Loving Vincent, flashbacks are used effectively to add depth to the narrative. Furthermore the lack of colour in the flashback scenes offer a break in the over coloured present scenes, which at times where so full of movement and colour that they produced a visual sensory overload.

I had heard little about this film until a few months ago, which I find strange as it is the first fully pained animated film to be made. You would think that a film that is making history would have been more high publicised. I first heard about Loving Vincent because I follow Douglas Booth on Instagram and found his posts on the film rather interesting so when I saw that my local cinema would be playing it and that it was nominated for the Oscar of Best animated feature film decided that Loving Vincent was worth a viewing. I think this highlights the lack of awareness of films such as Loving Vincent, we all know when the next superhero film is coming out, but films that are not huge Hollywood productions can simply be unheard of unless you follow independent cinema. But I am glad that Douglas Booth made me and I'm sure may others aware of Loving Vincent.

Overall I would say Loving Vincent is worth a viewing for its artistic merits. Personally I did find the narrative slightly muddled at times so I think a second viewing may be needed. I also found it slightly odd that each character had a different accent when they are meant to be from the same place/family etc... I would certainly like to find out the reason for this. But if you want to watch a film that's a little different to the everyday Hollywood film  without being completely obscure then Loving Vincent is the film to watch.

Please Follow and leave a comment Below. Would love to know what you think about this film or any film really.