on January 29, 2018
This week I have decided to write about my favourite cinema. I am not sure if everyone has a favourite cinema or if it is just me. I feel that when you go to watch a film at the cinema, the place itself can add or subtract from the general viewing experience. With that being said I think its fair to say that different films call for different environments, for me big epic blockbusters like 'Star Wars' or 'Avengers' are suited to modern cinemas whereas period films or romantic genre films are suited to smaller romanticised cinemas. That's not to say I would not go see 'Star Wars' at a small cinema because this year I have (all be it a second viewing), also towards the end of last year I viewed 'Victoria and Abdul' at an Odeon. But the reason I so often by-pass the larger cinemas for my favourite cinema is because they simply do not offer the same experience. 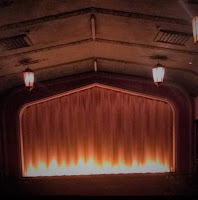 My favourite cinema is The Royal Cinema in Faversham. This cinema is not my closest cinema but it is closer than any Odeon/ Cineworld. But its proximity is not the reason I love Faversham cinema so much. The Royal Cinema is a charming one screen cinema in a small town. The cinema is independently owned and run, and is still rather old fashioned. I don't mean old fashioned in the sense that the equipment is outdated because that is certainly not the case (Yes there is a proper cinema screen and sound equipment). I say old fashioned because of the general ambiance, the building itself is retro, the seats are original and curtains open over the screen before the film starts. I mean the tickets are even old fashioned little rectangle ones and because it only has one screen so can only show one film at a time when you ask for a ticket you get to say 'just one please' as if you are actually in a movie (which is really cool). It is rare to finding an old cinema that has been modified but still retained its original charm; which makes Faversham almost magical. 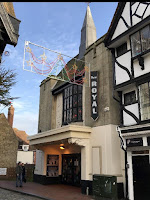 The Royal Cinema in Faversham was built in 1936 as an Odeon. It is  now considered a small cinema but when it opened it was actually called a big screen cinema (due to the size of the screen). It is thought to be one of only 100 original surviving big screen cinemas in the UK - which makes it worth a visit in my books. It is also one of the only two surviving mock Tudor Cinemas in the UK, the Tudor style is prominent in the cinemas exterior, where a central Tudor style window is framed by two ornate stone carvings. Once inside you are greeted by an old fashioned but generic cinema foyer that leads into the screening area, where the Tudor style is again obvious, with large lantern ceiling lights and beamed walls, the space itself is huge and you feel like you are watching a movie in a banquet hall or a upside down pirate ship - which again makes it worth a visit. When it first opened it had 700 seats although some of these have now been removed to create space, the auditorium itself remains its original size.

At Faversham they play a wide range of films from Hollywood Blockbusters/ the latest releases to hidden gems. Because this cinema has only one screen, they are only able to play one film at a time and the length of time a film will be showing varies from a few days to a few weeks, so it is important to check regularly to see what is on. The great thing about a one screen cinema is you can watch a film without hearing the sounds from the film in the next screen, which so often happens at multiplexes, this allows you to become fully immersed in the film. 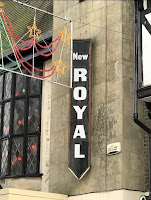 Another great thing about Faversham cinema is their film society - 'Faversham Film Society'. They show a wide selection of films, including independent British and American films, world cinema and the odd classic.  Before the film begins a little introduction is given by society members, which is  a lovely touch and at the end of the film you are handed a small piece of paper that you use to highlight whether you enjoyed the film or not. Faversham Film society films are screened every other Monday and tickets cost the same as attending normal screenings (which is £5). The Faversham Film society is a great example of the artistic vibe that is ever evident in Faversham and it is great to attend screenings that have an artistic focus.

Overall I would recommend Faversham cinema to everyone, it is a charming place that combines modern cinema with history. The tickets are a great price - I mean where else can you watch a film on opening night for £5? Moreover they offer a wide variety of branded snacks, popcorn and drinks all of which are affordable. The staff are always polite and welcoming which adds to the experience. I have placed links to the Royal Cinema website and the Faversham Film Society website below for you to look at. I cannot recommend this cinema more, if you want to watch a film in a room that could be part of a film set then The Royal Cinema Faversham is the place for you.

Please let me know if you've ever been to this cinema and what you thought. Also  I would love to hear about anyone else's favourite cinemas, so please leave a comment below.

Make sure you follow and scribe to my blog for more.