on January 13, 2018
Last night I saw Darkest Hour and it is a truly captivating watch. The films focus falls upon the second year of World War II when defeat to the German army seems imminent. Darkest Hour combines director Joe Wright's filmic style, incredible acting and a truly emotive period of world, specifically British history. It is not hard to see why this film will be one to watch at the upcoming awards ceremonies. 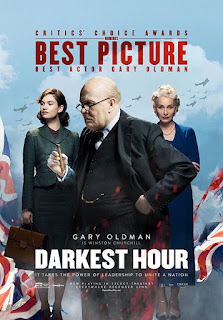 Darkest Hour is  a war film that focuses on British politics and Winston Churchill's important role in May 1940. The film spans a small period of time that was fundamental to the war effort. At the time the film is set Britain and its Ally France are at war with Germany, on the 10th May 1940 Churchill takes over as Prime Minster on the same day Germany invades France, Belgium and Holland. Winston Churchill played by Gary Oldman is faced with the task of choosing between entering peace talks and continuing to fight what was at that time a losing battle. Oldman's performance as Churchill is faultless, he captivated my attention from start to finish. Personally Oldman's portrayal of Churchill is one of the best if not the best in cinematic history and I think he deserves the Oscar and BAFTA for best actor. I also enjoyed Lily James's performance as Churchill's personal secretary: Elizabeth Layton. It was refreshing and enjoyable to see James in a different role to the breathless and romanticised characters she is usually cast as. Both the actors and the script bring an element of comedy to moments of the film, which add to the highly emotive nature of the film. within minutes you go from laughing, to feeling anger, to tears, to feeling pride, it is rather incredible in the way it manages to manipulate the audiences emotions.

Joe Wrights style is noticeable throughout the film. He plays with light and shadows, showing Churchill often lit against darkened surroundings. There are repeated shots of Churchill walking towards the camera though corridors alone. Both of these pull focus to Oldman's impeccable performance. In one scene we are shown an overhead shot of the battle ground in France being bombed by German bombers, the shot transitions seamlessly to a face of a fallen soldiers who's eyes reflect that bombing. This scene is incredible because you do not realise that the shot is transitioning until it has already happened.

I felt an overwhelming sense of pride throughout the film, it makes you reflect on the past and the bravery of the British people. In one emotive scene Churchill takes a trip on the London underground to see if he is making the right choices, he wants Britain to fight the war to end and the public help him to realise that they too want to continue to fight, for their freedom and country. Which leads to the 'We Shall Never Surrender' speech (which made me want to stand up and cheer) that has become a famous moment in British history. Furthermore during the talks about the opportunity to try to negotiate with Hitler, I felt angry at the notion that the British people would surrender to a dictator. For me it ignites a sense of national pride.


Overall I would recommend Darkest Hour to everyone, it is not just a film for fans of war films because yes it is about war but its focus is on Churchill and his decision to fight World War II until the end. Moreover it is worth a watch for the acting and visual style even if the subject matter does not interest you. I will be looking forward to seeing how successful Darkest Hour is at the upcoming awards cerimonies. I give the Darkest Hour 5 stars.

Please let me know what you thought of this film and my review and let me know if there are any films you would recommend I watch.