on December 31, 2017
The Greatest Showman (2017) truly is a great show. I have just returned home from watching The Greatest Showman and I can honestly say I have not enjoyed a film this much for quite a while. From start to finish I was captivated by mesmerising visuals, entertaining songs and brilliant showmanship. This film is every bit the spectacle a motion-picture should be. 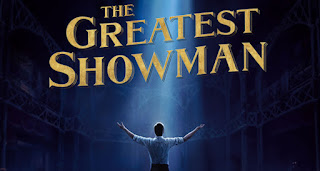 The film stars Hugh Jackman as P.T. Barnum the creator of the Barnum Circus. The Greatest Showman begins with a young Barnum who is ambitious but penniless and continues on to show how he became the father of the greatest show on earth. Jackman's performance is convincing throughout, his portrayal of Barnum could not have been more perfect for the films sanitised portrayal of the Barnum circus. Michelle Williams performance as Barnum's wife Charity Barnum matches that of Jackman's. Charity is a beautifully delicate character that is a shinning light throughout the narrative, her character is modern in that she breaks from her family for a man that can offer her very little and even when Barnum amasses a fortune all she wants is to be happy with her family.  A surprize for many will be Zac Efron's performance, as a fan of his since his High School Musical days I was not surprised by his fantastic performance. His character Philip Carlyle surrenders his birth right for place in the Barnum Circus. Philip is for me possibly the most admirable character, he unlike Barnum is not trying to prove anything to anyone and when Barnum turns his back on the circus to become more upper-class it is Philip that stands by the circus acts and this makes the ending a perfect fit. His relationship with Anne a trapeze artist (played by Zendaya) is convincing throughout and their song 'Rewrite the Stars' is both visually stunning and epic in its message and emotion.

The Greatest Showman has a central message that is always going to be relevant. This message is equality and acceptance for all. I'm pretty sure everyone would agree they felt something throughout the song 'This is me' and it reminds us that everyone is equal and no one should be laughed at for being different.

For me this film is what a musical should be, it is a show, it pulls you in. I wanted to be a part of the dance numbers, to sing along and when a musical does that it is a success. A year ago we were living in La La Land (2016) mania, personally I did not enjoy La La Land. I felt it was nothing more than a Hollywood self indulgent film that stole from the musical films of the Golden era of cinema. The songs were subpar, the dance numbers seemed unrehearsed and unoriginal. My option of The Greatest Showman could not be more different, it felt completely original, the songs are empowering and the dance numbers are so on point and perfect. This film may also have one of the best opening sequences I have ever watched, I had Goosebumps before Hugh Jackman had sung the first line of 'The Greatest Show'. I for one will be playing the soundtrack over and over again until I know every song off by heart.
If you want to go to the cinema and be amazed then The Greatest Showman is the film for you. It truly is a cinematic spectacle. Ladies and Gents this is the moment you've been waiting for.

Please let me know your thoughts of the movie in the comments below.