Now I love Christmas, for me it really is the most wonderful time of the year. One of the best things about Christmas is the films. In winter the nights are dark and cold and all you want to do is sit on the sofa wrapped in a blanket with a hot chocolate whilst watching festive films. I recently saw The Man Who Invented Christmas (2017) at the cinema, this film is a retelling of sorts of the classic 'A Christmas Carol' except this is about how Charles Dickens (Dan Stevens) wrote the novel. I found this film a really enjoyable watch even if it was a little scary at times. This film got me thinking about my favourite Christmas films, so I have decided to make a list of my top five. 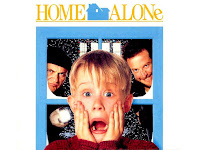 Merry Christmas ya filthy animal! Kicking off my top five is the classic  Christmas film: Home Alone. Little Kevin McCallister (Macaulay Culkin) is left home alone by accident  when his chaotic family leave for a Christmas vacation. During his brief time home alone Kevin finds himself in a situation where he must protect his house and himself from robbers. This film is full of Christmas songs and moments, that combined with an incredibly clever boy and his plans make for a truly great watch. Lets face it this film means Christmas Plus I love how his gloves are attached to his coat, I mean where can I get one of those?

I think Love Actually is quite possibly on everyone's favourite Christmas film list. Throughout December I see  on people's Snapchat's and Instagram's that they are watching Love Actually, there was what felt like a universal rejoice when it was added to Netflix earlier this week. It is not hard to understand why this film is a favourite. I am not going to even try to sum up the plot because lets face it there are like 20! But Rowan Atkinson's cameo scene in the department store is quite possibly one of my favourite film scenes of all time, I even had a short conversation with someone about it in the supermarket the other week. This film is an essential for every Christmas.

'Inside a snowflake like the one on your sleeve, there happened a story you must see to believe'. Not only is The Grinch a crazily Christmassy Christmas film it is also a story that teaches acceptance, kindness and change. Jim Carrey's Grinch is witty, sassy and in my mind one of the best characters ever created which is probably why I watch this film over and over again. I admit to spending nearly all of December wondering if I could re-create Cindy Lou's hairstyles. Plus who doesn't love Max the doggie?

Christmas With the Kranks earns such a high place on my list because every year I cannot wait to watch this film. This film is about married couple Luther (Tim Allen) and Nora (Jamie Lee Curtis) and their adult daughter Blair (Julie Gonzalo) who joins the peace corp just before Christmas, so Luther and Nora decide to skip Christmas. But once the neighbours discover their plan all sorts of hilarity ensues. This film is brilliant from start to end and Jamie Lee Curtis is brilliant. If you have not seen this film I could not recommend it more.

Arthur Christmas is my all time favourite Christmas film. Arthur Christmas follows the Santa family on Christmas eve. The story revolves around an undelivered present that Arthur (Voiced by James McAoy) is desperate to deliver despite not being Santa Claus (His father) or the next in line (his brother Steve). Arthur is adorable, he really believes in the magic of Christmas and I personally see myself in him - which could be why I enjoy the film so much. This film is down right hilarious from Arthur singing Silent Night to a group of lions to Grand Santa's (Voiced by Bill Nighy) out dated views. This film is overall Christmassy and great fun to watch. I would recommend this film to anyone! I simply Cannot wait to watch it for the 100th time this Christmas.


Please let me know what your favourite Christmas films are and if you have any suggestions on ones I should watch. Have a Very Merry Christmas.

I now have a Facebook page YAY! Please give it a like to keep up with my blog posts click the link or just search for @justanotherfilmblog
https://www.facebook.com/JustAnotherFilmBlog/?view_public_for=242769742958797