Hi everyone! I don't know about you but I am crazy excited for Avengers: Endgame. So to get ready for its release in April I thought it would be great to re-watch every MCU movie so far! Now this is quite an undertaking, there are 20 films to watch! I thought that others might also want to prepare for Avengers: Endgame as well so I have done all of the maths for you. Now originally I was going to publish this list just 10 weeks before Endgame's release however I realised that not everyone would have time to watch 2 movies a week especially considering some of these film have pretty long run times. So by starting this week (The week beginning Monday 14th January 2019) you have a grand total of 15 weeks to watch 20 movies, that makes it a little more manageable.

So see the image below? That is a countdown I have created so make sure you save it, print it and share it and as you watch a film cross it off. I would love to see your progress, hear your options on each film etc... so if you post on social media make sure you tag Just Another Film Blog. As you can tell I decided to list the films in their order of release rather than in timeline order, this is mainly because I like to see how the MCU has developed over the years but if you want to watch them out of order or in another timeline then feel free to - just cross off as you go. 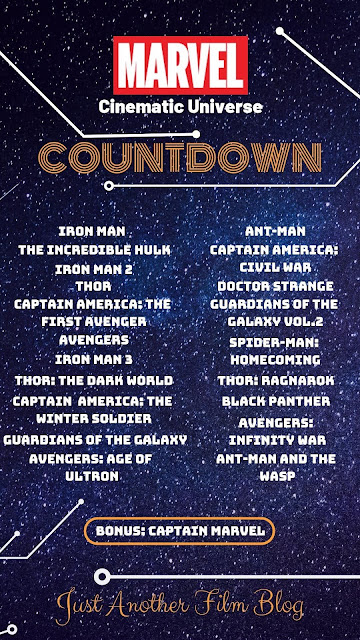 As you can see Captain Marvel is released on the 8th March 2019, so I have added it as a bonus film, but I would highly recommend you watch it before going to see Endgame because its very clear that Captain Marvel is going to be a very important character in Endgame.


Thank you for reading.
Your support means everything.

P.S. How get is the Spiderman Homecoming trailer? I lost it when I heard Nick Fury's voice!!