Countdown to Star Wars: The Rise of Skywalker + Giveaway

Hi Everyone, this is a very special post! If you have followed Just Another Film Blog since the beginning you will know that I started blogging after attending the midnight screening of Star Wars: The Last Jedi, I'd thought about blogging before but I'd never gained the confidence to take the leap. My biggest fear was that no one would read my posts - how wrong I was, I wrote my first review on The Last Jedi and I hit 500 reads within a week. So, I want to take this opportunity to thank everyone who has read and supported my blog, it's not always easy and it takes a lot of work but knowing you read and enjoy my posts is so incredibly awarding. So, that brings me to Star Wars: The Rise of Skywalker! You know how much I love a countdown/list so here is my countdown to The Rise of Skywalker. The film is released on the 19th December here in the UK and I will be attending a midnight screening. In order to prepare for the final movie of the Skywalker saga I have created a countdown, now there's no schedule for watching the movies - just watch them when you can and in the order listed!

Check out the ten things I'd like to see The Rise of Skywalker: https://thisisjustafilmblog.blogspot.com/2019/04/10-thing-i-want-to-see-in-star-wars.html

I will be crossing off the movies throughout November and December and you can join in by following me on Twitter, Facebook and Instagram - I'll pop the links below. Make sure you save the countdown and share with all the Star Wars fans you know!! From the footage we have seen so far in the form of trailers it looks like we are in for an epic conclusion the Skywalker Saga and I am beyond excited! The return of Palpatine certainly mixes things up and it's likely he will be looking to destroy the light side. I think it's very clear that The Rise of Skywalker will reference the pervious eight films in th saga, which is why I created the Countdown - it is essential that we watch all the films that have lead to this final moment. I cannot wait to get started. 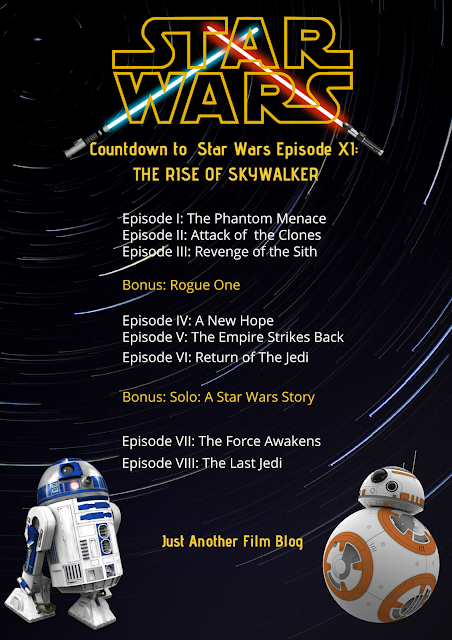 I hope to see you all joining in with the Countdown! xx